OKMULGEE COUNTY, Okla. (KFOR) – The Okmulgee County Sheriff’s Office is now offering a $10,000 reward for any information leading to an arrest and conviction of the person(s) responsible for the murder of three people inside their home in September.

At around 3 p.m. September 7, the Okmulgee County Sheriff’s Office responded to a home on Lake View Circle, north of Beggs, in reference to a family member who went the residence and found multiple people dead. 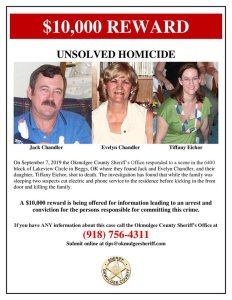 Officials have identified the victims as 65-year-old Jack Chandler, his wife, 69-year-old Evelyn Chander, and their daughter, 43-year-old Tiffany Eichor.

“The investigation has found that while the family was sleeping, two suspects cut the electric and phone service to the residence before kicking in the front door and killing the family.”

The daughter who was killed, Tiffany Eichor, had previously been in a relationship with Barry Titus. She had a pending domestic abuse case against Titus.

OKC Attorney Keegan Harroz was Titus’ attorney in that case.

A new search warrant shows that Keegan Harroz and Barry Titus claim to be married.

Ammunition and weapons were found while investigators combed through their Oklahoma City home looking for evidence in Eichor and family’s unsolved triple-murder.

Harroz’s brother’s home in Collin County has also been searched in connection with this homicide investigation.

Investigators also wrote in the new search warrant that Barry Titus had previously made threats to kill Tiffany Eichor’s family.

Both Harroz and Titus have been indicted by a federal grand jury on federal weapons and ammunition charges.

State prosecutors have not charged Harroz and Titus in connection to the murders.