OKLAHOMA CITY (KFOR) — Two people are recovering after being shot outside of the funeral of another shooting victim.

“We got out of the car and somebody that she knew said it was her cousin that got shot,” LaShanda Blonner told News 4.

Blonner is talking about her friend, Lynn Anderson.

Anderson was in shock and searching for answers at a chaotic scene outside of Zion Baptist Church near NE 28th and Kelley on Monday where her cousin may have been one of two people shot.

“I’m just trying to make sure the people that we do know, make sure they alright. And make sure that they still, we don’t know if they still living dead or what,” Blonner said. “Everybody that was here was attending a funeral.”

Witnesses on scene said it was a funeral for 18-year-old Donyea Robinson.

Robinson was shot and killed after he was caught in the crossfire of a shootout between two vehicles in Del City earlier this month.

His killer is still on the run.

“We were aware of this funeral before,” Maj. Dexter Nelson with OCPD said. “We keep contact with funeral homes and when they have a funeral that they think might be questionable, they let us know and we monitor those situations.”

Police were already outside of the funeral before those shots rang out as the bullets hit one man and one woman.

Then, officers responded to another scene minutes later at NE 23rd and Walnut.

“A pursuit erupted from this incident and we do have one subject in custody,” Nelson said. 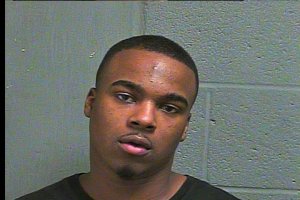 Police have identified that suspect as 20-year-old Terrance Britton. He will be booked into jail on two counts of assault with a deadly weapon and one count of attempting to elude police.

“That’s one of my biggest fears, to go to a funeral and something like this happens, like that’s crazy,” Blonner said.

At last check, the man was in good condition and the woman was in critical condition.

Police believe more suspects are on the run but they do not have descriptions for them at this time.