OKLAHOMA CITY (KFOR) – Supporters of a movement to expand Medicaid in Oklahoma has turned in hundreds of thousands of signatures, calling for a state question on the issue.

Organizers say expanding Medicaid would cover 200,000 Oklahomans who can’t afford health insurance, and would help single persons who make $21,595 per year or less.

“They make over the poverty level right now that would qualify them for Medicaid, but they can’t afford to actually go out and buy a plan on the market, so they simply go without healthcare insurance,” Yes on 802 Campaign Manager Amber England said.

Since the Affordable Care Act was passed in 2014, Oklahoma has rejected federal money for Medicaid expansion. A bill that would expand Medicaid coverage in the state died in the Legislature last session.

​”Right now, the fact that we’re not accepting Medicaid expansion, we’re turning away over a billion dollars a year annually​,” England said.

On Thursday, volunteers with ‘Yes on 802’ turned in thousands of signatures in order to get State Question 802 on the ballot. The group needed 178,000 signatures to move their petition forward.

Volunteers from all over the state headed to the Secretary of State’s office turn in signatures. Organizers say volunteers collected signatures across the state in not only big cities but also small towns like Wakita, Altus and Waurika, where expanding Medicaid would impact rural hospitals. 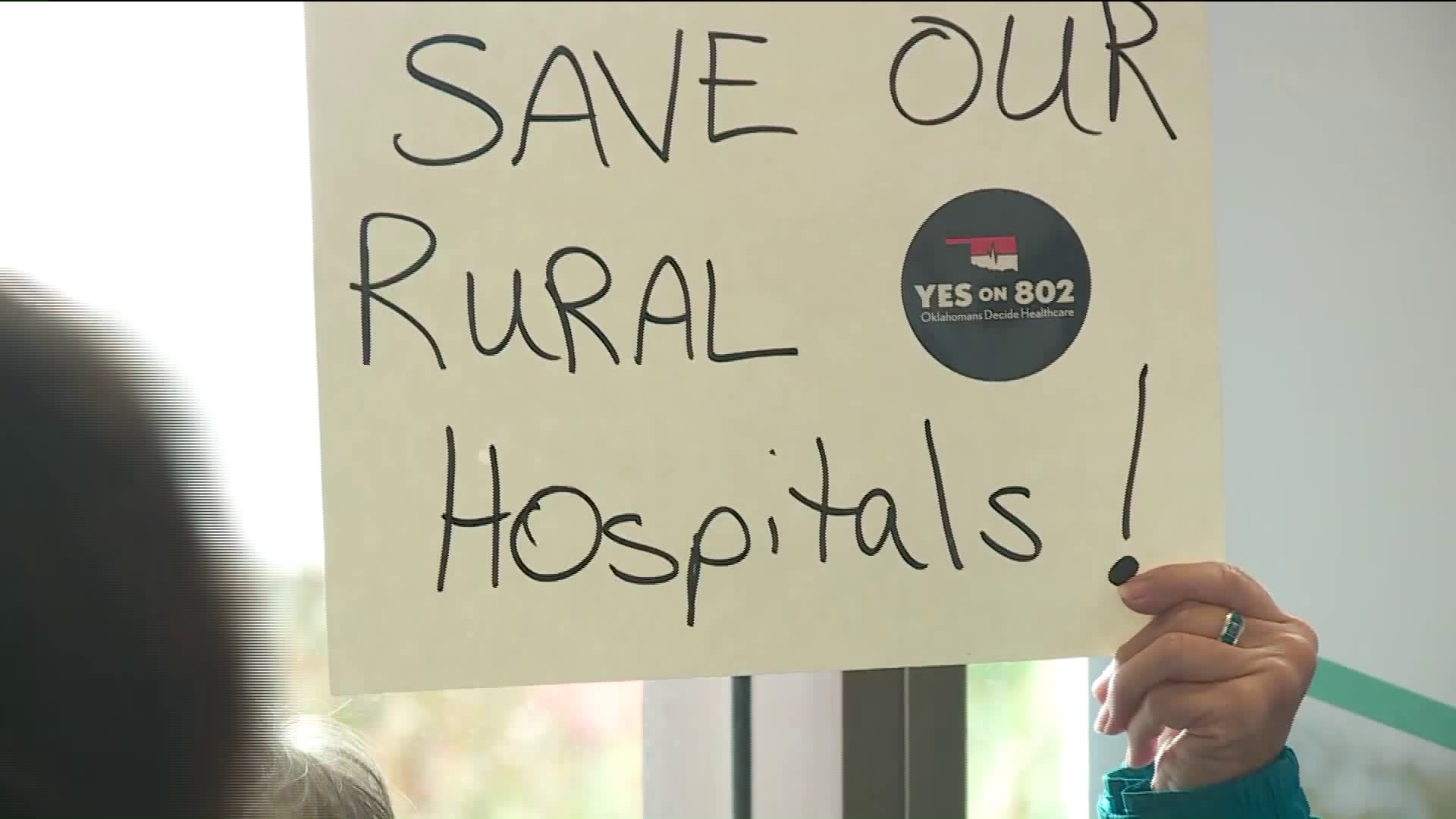 In 2016, Jefferson County Hospital in Waurika was minutes away from closing its doors due to decreased funding.

“Our hospital was literally 30 minutes away from closing,” said Richard Gillespie, president of Jefferson County Hospital.

Officials say they were able to partner with Duncan Regional Hospital to stay open, which also kept their rural clinics open as well.

“Medicaid expansion is not only the right thing to do, but it’s the fiscally responsible thing to do,” said Gillespie.

“We are ready for Oklahomans to decide this issue at the ballot box,” England said on Thursday.

In 90 days, organizers say they created 75 events across the state and trained 1,500 volunteers.

“This is what a grassroots movement looks like,” England said.

“It says that this issue is personal to Oklahomans,” England said.

Opponents of the move say the cost of expanding Medicaid is simply too expensive.

​”Any state that does Medicaid expansion is responsible for 10 percent of the costs, whatever they are​,” Jonathan Small, President of the Oklahoma Council of Public Affairs, said.

The federal government pays the other 90 percent of the expansion.

The conservative think tank has opposed expanding Medicaid from the beginning and claim people signing the 802 petition aren’t fully informed.

​”They gather signatures, basically saying, ‘Hey, would you like cookies and ice cream every day?’ and pretend there’s a huge inertia for whatever the petition initiative is that’s being circulated​,” Small told News 4 earlier this week.

“I think it’s disgusting that we would compare people needing health care in rural Oklahoma to cookies and ice cream,” England said.

Opponents can still challenge the signatures or ballot title.

If there are no legal setbacks, the governor will decide when the state question will be voted on.

Who is Viktor Bout? The US released an infamous arms …

A big car bill makes its way to President Biden’s …

A former Moore teacher under investigation

A family seeks justice for loved one

A car crashes into restaurant in Bethany

Oklahoma remembrance ceremony on the anniversary …

The House on Thursday passed a bill to safeguard marriage equality, sending the measure to President Biden’s desk and marking the first time Congress has provided federal protections for same-sex marriage. The legislation, titled the Respect for Marriage Act, passed in a 258-169-1 vote. Thirty-nine Republicans joined all Democrats in supporting the measure. The Senate […]