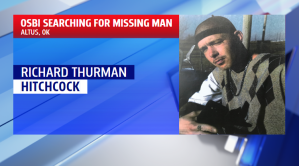 ALTUS, Okla. (KFOR) – The Oklahoma State Bureau of Investigation (OSBI) is looking for a missing man from Altus. Richard Thurman Hitchcock, 33, was last seen in the Granfield area on November 9, 2019.

Hitchcock is described as a white male with brown hair and brown eyes. He is 6 feet tall and 160 pounds.

Altus Police began looking for Hitchcock after he was reported missing by his wife. Police conducted land and air searches in the area of 54 and 70 in Granfield. They located footprints and tracked them until they disappeared. The District Attorney’s office requested OSBI investigative assistance with the case yesterday.

Anyone with information about Hitchcock’s whereabouts or anyone who encountered him between November 8 and 9 should contact the OSBI at (800) 522-8017 or tips@osbi.ok.gov.