NORMAN, Okla. – A local university is responding after a student group created a petition to remove a controversial statue outside of one of the school’s most well-known buildings.

Last month, students at the University of Oklahoma took notice after a bronze statue titled ‘Covered Wagon’ appeared outside of OU’s Gaylord Hall.

William Obering, a 1957 OU graduate, donated the funds to the University of Oklahoma Foundation to enhance the university’s art collection and public spaces. With his donation, the foundation purchased the ‘Covered Wagon’ sculpture from artist Tom Otterness. 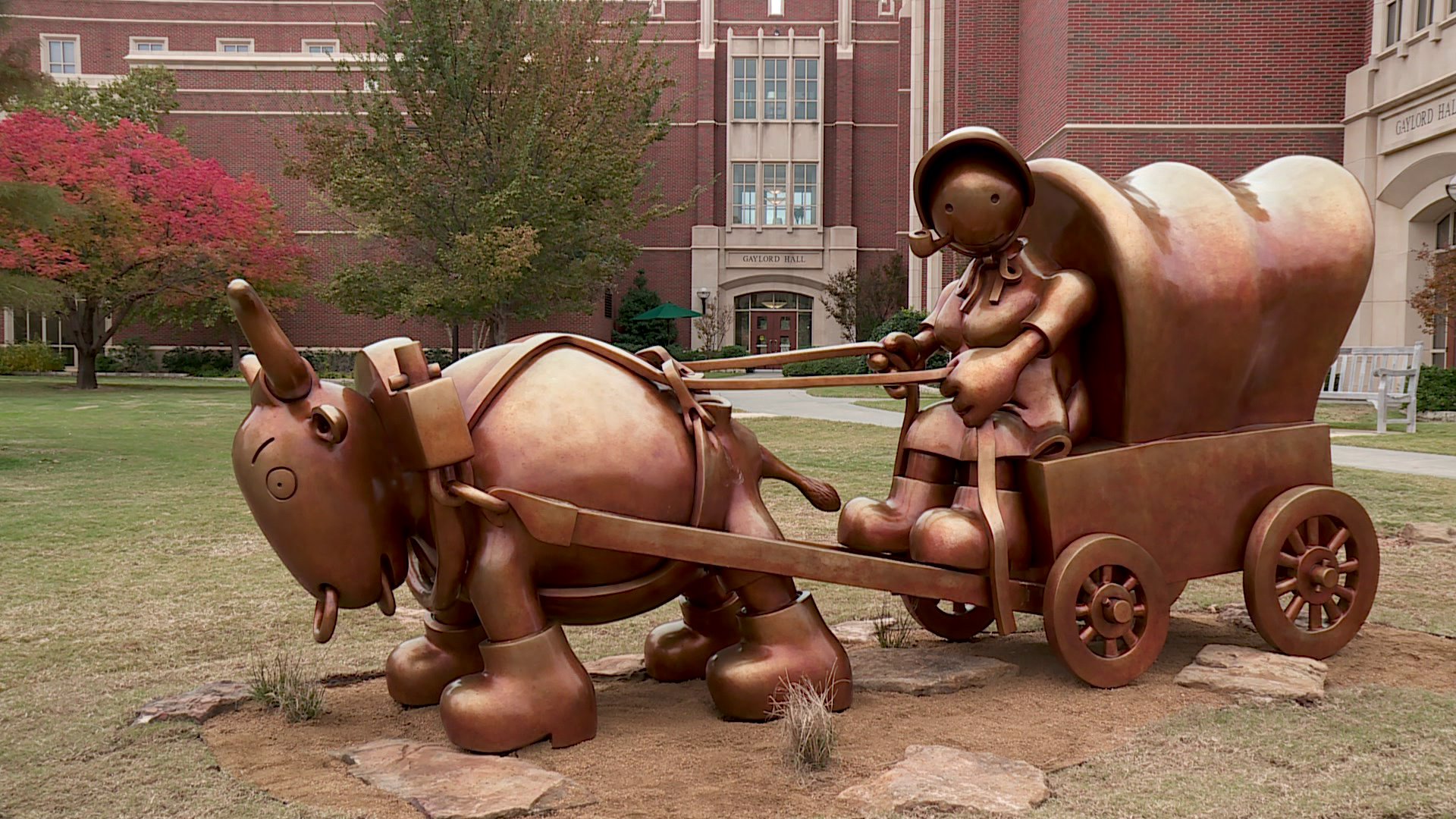 While many students simply disliked the statue, others have complained about the artist behind it.

The OU Daily reported that Otterness faced controversy for animal abuse after he allegedly adopted a dog from a shelter, tied it up and shot it on camera as a form of ‘art.’ The recording was called “Shot Dog Film” and was played on a continuous loop during a gallery show.

Earlier this month, several student organizations signed an open letter to have the statue removed.

“We demand to know why the university still hasn’t responded to the allegations made against Mr. Otterness and why it has decided not to remove the statue despite the horrible things we have come to learn about the artist’s past as well as the questionable artistic references to colonization,” PRSSA Vice President Sophie Schwechheimer told the OU Daily.

In addition to the open letter, a student petition to have the statue removed has received over 3,500 signatures.

Now, the University of Oklahoma says it will implement a new process for approving art on campus. In a letter to students, university officials say the statue will remain in place.

"A recent installation of a statue donated to the university has resulted in frustration from some in our OU community. Concerns about the artist and about the artwork itself resulted in an open letter from some in the student body to the OU president requesting its removal. These concerns have been heard, and we are working to ensure all future art installations go through new processes that will be created under the new administration with approval by the OU Board of Regents," the letter read.

Officials say President David Boren and Obering agreed on the location of the 'Covered Wagon' sculpture and signed an agreement binding the university.

However, they say neither Obering nor university officials "were aware of the artist's history when the gift was made."

"Concerns raised about the statue have illuminated the need to establish a more thorough review process for gifts of art on campus beyond the president’s office. This will be remedied. Under the new executive team, the university will devise a campus plan to address the vetting of art/artists and locations of new art, signage, etc. OU Board of Regent approval will be sought in advance of acceptance of such gifts," it continued.

University leaders stress that art is subjective, and say the 'Covered Wagon' sculpture "will remain in its place with the understanding that future gifts will fall under a more formal Board-approved process."

Trump claims coronavirus is ‘going to go away’ despite mounting concerns

Police hoping to identify couple after theft at casino

Trump claims coronavirus is ‘going to go away’ despite mounting concerns