NORMAN, Okla. – The University of Oklahoma looking into a racially charged video originating on Snapchat of an apparent sorority member posting a video of another student allegedly using the n-word.

Some girls that attend OU thought it would be funny (especially Olivia Urban and Francis Ford) to put black paint on their face and say “I am a nigger” @UofOklahoma #whatareyougoingtodo ???? pic.twitter.com/ccWGnG4L7N

One of the girls in the video is said to be a part of the Tri-Delt sorority on campus and another girl can be heard saying, “I am a nig***,” in the video. 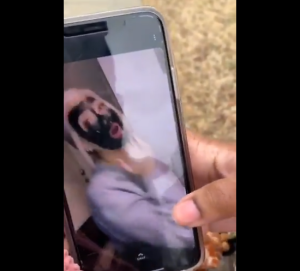 The OU Tri Delta Chapter has issued the following statement:

“Founded as a society that shall be kind alike to all, Tri Delta deeply regrets the insensitive and offensive actions of one of our members.  We are diligently working with the University, our volunteers and our Executive Office staff to investigate the incident and take appropriate action to hold our member accountable.  We understand the concerns that this raises within the campus community and beyond and will prioritize our efforts to live kind and lead kind as Tri Delta women and as part of the larger OU community.”

This isn’t the first racist video to linked to The University of Oklahoma.

In March of 2015, a video surfaced of some members of the Sigma Alpha Epsilon fraternity singing a racist chant.

That chapter was permanently closed and removed at the university.

As for this incident – the university released a statement saying,

“We have been made aware of an inappropriate and derogatory video circulating on social media posted by an OU student. The University of Oklahoma abhors such conduct and condemns the students’ actions and behavior in the strongest terms possible. While students have the freedom of expression, the negative impact on such conduct cannot be underestimated. The university is following up with the students. Our goal is to be a welcoming and inclusive community and we condemn any behavior whose goal is to diminish or belittle other members of the OU community.”

As well as the following video:

The OU Theta Gamma chapter of Tri Delta released a statement Saturday saying the girl who posted the video is no longer a part of the sorority.

IRS has $1.3 billion in unclaimed tax refunds, and there’s 1 week left to claim them

BURBANK, Calif. (BRPROUD) - The Walt Disney Company is dealing with another controversy after leaked documents found their way into the City Journal.

The author of the story is Christopher F. Rufo, and documents he claims to have obtained delve into "Disney’s “diversity and inclusion” program, called “Reimagine Tomorrow.”

OKLAHOMA CITY (KFOR) – A measure that aims to better protect bicyclists has been signed into Oklahoma law.

(WJW) -- Several online petitions have been created asking Congress for monthly stimulus checks through the end of the pandemic.

Over 2.1 million people have signed a Change.org petition started by a restaurant owner in Denver. In her petition, Stephanie Bonin calls on Congress to support families with a $2,000 payment for adults and $1,000 payment for kids immediately and through the duration of the pandemic.

IRS has $1.3 billion in unclaimed tax refunds, and there’s 1 week left to claim them

See how much states, counties will get from $350B COVID relief program

Jury selection begins in trial of Oklahoma teen’s 1997 murder against man linked to at least 5 other kidnappings, killings

Cyberattack on US pipeline is linked to criminal gang

Single-family homes increase in price by $36,000 due to lumber shortage: study

May mortgage outlook: What to expect from rates in the days ahead

See how much states, counties will get from $350B COVID relief program

US lawmakers look into threat assessment from Jan. 6 attack

Both sides use jobs report as evidence in infrastructure spending debate