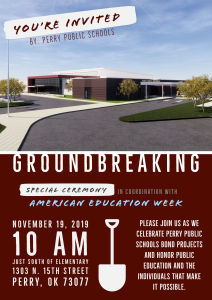 American Education Week runs from Nov. 18-22, and millions of educators, parents, students and civic leaders will join the National Education Association to bring awareness to the critical need to provide every child with a quality public education, according to a Perry Public Schools news release.

“Both of these buildings are 60 to 70 years old and have a variety of issues. The buildings are totally outdated and need to be replaced badly,” McCarty said.

January 2022 is the planned completion date for the facility, according to McCarty.

Once the seventh and eighth-grade students move to the new building, the old junior high building will be torn down. However, John Divine Hall has historic significance to the Perry community, and will remain standing, McCarty said.

The new facilities are a significant step toward a long-term goal.

“Perry is kind of small, so the new facilities will be built about two miles from where we are now. And they will be built in the proximity of our current elementary schools,” McCarty said. “There’s a long-term vision to at some point have all of our facilities be in a certain geographic location.”

The total cost for the new facilities will be approximately $15 million, McCarty said.

The new facilities are funded by a bond that was passed in November 2018 and is a continuation of a previously established millage rate of 28-and-a-half to 29-and-a-half-mills.

“It will stay at this millage rate for the next 12 years. It just maintains the current level. That level was established several years ago when they had a bond measure,” McCarty said.

Kansas to recount abortion vote by hand, despite …

By chance, AP reporter on scene to witness Rushdie …

Hot nights: US in July sets new record for overnight …

WASHINGTON (AP) — The flagship climate change and health care bill passed by Democrats and soon to be signed by President Joe Biden will bring U.S. taxpayers one step closer to a government-operated electronic free-file tax return system. It’s something lawmakers and advocates have been seeking for years. For many Americans, it’s frustrating that beyond […]

MONTGOMERY, Ala. (AP) — A federal jury awarded Republican Roy Moore $8.2 million in damages Friday after finding a Democratic-aligned super PAC defamed him in a TV ad recounting sexual misconduct accusations during his failed 2017 U.S. Senate bid in Alabama. Jurors found the Senate Majority PAC made false and defamatory statements against Moore in […]

House Republicans on Friday wasted no time rallying behind former President Trump following a court’s decision to unseal the search warrant that had empowered the FBI to search his Mar-a-Lago residence in South Florida earlier in the week.

House Democrats passed their sweeping tax, climate and health care bill on Friday, sending the $740 billion legislation to President Biden’s desk and securing a significant victory for Democrats less than three months before the midterm elections.

What La Niña means for fall