WEATHERFORD, Okla. (KFOR) – A play commissioned by the John F. Kennedy Center will have a rare performance at Southwestern Oklahoma State University. 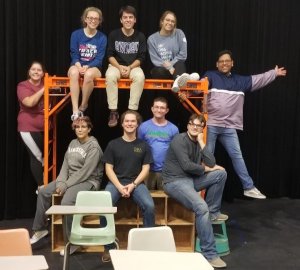 SWOSU Theatre will present the Oklahoma premiere of Where Words Once Were by Finegan Kruckemeyer, Nov. 16-19, on the Weatherford campus.

This will be the play’s sixth performance in the United States.

The Theatre for Young Audiences Department at the John F. Kennedy Center for the Performing Arts in Washington, D.C. commissioned Kruckemeyer to create a play in which language was the main character.

“This provocation was so evocative, so shapeless, so poetic that many ideas came to mind,” Kruckemeyer said. “But eventually one was sat down with – that of a world allowing finite words, a boy possessing few, a girl afforded none. Forbidden from meeting, they meet. Forbidden from questioning the rules, of course (as heroes, heroines, teenagers) they do.”

Kruckemeyer wrote the story of a dystopian society where language is controlled by limiting the vocabulary of “The City” to 1,000 words. When a new word is needed, an old word is banned from the language.