Officials responded to the 7-Eleven near S.W. 4th and Telephone Rd. around 8 p.m. 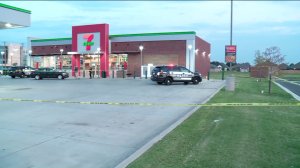 Police say they were attempting to serve a felony warrant on a man, Brian Richardson, and found him at 7Eleven.

When they tried to serve the warrant, police say Richardson produced a knife.

Moore police say at one point during the incident, Richardson was shot an unknown number of times. He then attempted to run from the scene after being shot but was found near the corner at the back of the building.

He was taken to the hospital where he is in serious/stable condition, according to police.

Richardson is currently under investigation by authorities after he was allegedly found with child pornography on his phone. 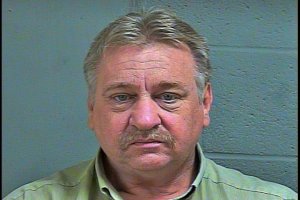 According to court documents, Richardson worked for the Community Action/ Head Start Program and drove “a bus year-round picking children up and dropping them off.”

He is also under investigation for indecent exposure involving two young victims.

The officer who fired his weapon has been identified as Lt. Chris Maddocks, a 21 year veteran of the force. He was not injured and is on administrative leave pending the investigation.

Sgt. Jeremy Lewis with the Moore Police Department says officers were wearing their body cams, and will review the footage.

Officer shot in Louisville walks into roll call the next morning

OKLAHOMA CITY (KFOR) - If you are working from home, you've probably noticed a few things that you would like to change.

The Oklahoma Visual Arts Coalition says you can redecorate a room in your home by adding a piece of artwork made by a local artist.

(AP) - A major college football season that was in peril six week ago as conferences succumbed to concerns about COVID-19 is reconstituting.

The West Coast got back in the game Thursday night, The Pac-12 set Nov. 6 to start a seven-game season, joining the Big Ten in overturning August decisions to punt on fall football. The Mountain West followed up a few hours later by announcing it is aiming to kick off Oct. 24.

ARDMORE, Okla. (KFOR) - Veterans in Oklahoma will soon be able to be laid to rest in a State Veterans Cemetery after a recent announcement by the U.S. Department of Veterans Affairs.

The U.S. Department of Veterans Affairs National Cemetery Administration awarded a $7,355,463 grant to the state of Oklahoma to establish a State Veterans Cemetery.

Officer shot in Louisville walks into roll call the next morning

Norman students to head back to in-person classes in phases