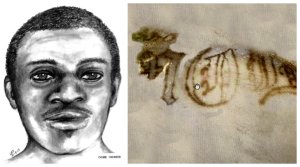 OKLAHOMA CITY – Oklahoma City police have released a sketch of the unidentified homicide victim whose body was found on a burning couch in a field last week.

Investigators are hoping that the above sketch of what the homicide victim is believed to have looked like, as well as an image of a tattoo found on the victim’s upper left chest area, will lead to the victim being identified, said Megan Morgan, assistant public information officer for the Oklahoma City Police Department.

A couch was found burning on the side of the road near Northeast 50th and Sooner Road on Sept. 26.

Firefighters put out the flames and found a body on the couch.

Investigators could not ascertain the victim’s identity.

“The body had been totally consumed by the flames so obviously that… puts obstacles in the way of our investigators,” MSgt. Gary Knight said last week.

Knight said the victim’s death was “very clearly a homicide.”

Anyone who recognizes the victim’s face or tattoo from the above image or has any information on the victim’s identity is asked to call the Police Department’s homicide tip line at (405) 297-1200.

OKLAHOMA CITY (KFOR) - After Thursday's house explosion, many people may be worried about their own homes' fireplaces.

Investigators say the cause was a homemade log lighter that was left open.