OKLAHOMA CITY (KFOR) -Less than 24 hours after a shooting at a busy mall in Oklahoma City, authorities say the alleged gunman has been taken into custody.

On Thursday afternoon, a gunman opened fire inside Penn Square Mall as hundreds of shoppers were trying to buy last-minute Christmas gifts for loved ones.

“The gunshots were like one of them and then three or four after that,” one shopper said.

Police say it all started with a fight inside the Foot Locker store. At that point, the alleged suspect pulled out a gun and shot a man, who family members identified as Gerron Cobb.

After hearing the gunshots, chaos erupted across the mall as shoppers ran toward the exits or found places to take cover.

“Everybody started running,” a shopper said. “They were crying.”

Within minutes, police officers and SWAT team members swarmed the mall, searching for the alleged suspect.

However, investigators determined the suspect had already left the area.

Cobb was rushed to the hospital in critical condition with a gunshot wound to the chest.

Early Friday morning, officials with the Oklahoma City Police Department told News 4 the alleged shooter had been taken into custody.

Through an investigation, detectives were able to identify the suspect and started searching for him. At the same time, authorities tell News 4 the alleged shooter’s father talked him into turning himself over to the police. 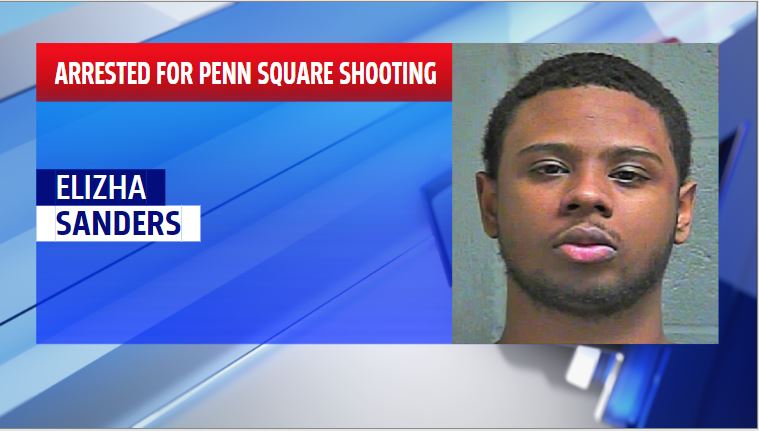 According to an arrest warrant affidavit, officials say Sanders and the victim have had issues in the past.  When they saw each other in the store, they got into an argument that turned into a physical fight.

Once the fight was over, witnesses say Sanders pulled out a gun and shot the victim.

“After the victim was shot he fell and began crawling out of the store. Sanders pursued the victim continuing to shoot at him,” the report states.

Sanders was arrested on one complaint of assault and battery with a deadly weapon.