EDMOND, Okla. – Weeks after an Edmond man was found dead in his home, authorities say they have now arrested two people in connection with his death.

Late last month, Sawyer English was unexpectedly found dead in his home after coworkers called the police when he didn’t show up for work for several days.

At the time, officials said his death was not the result of “natural causes.”

Last week, the Edmond Police Department released a statement that officially identified the 24-year-old, and called his death a homicide.

“It doesn’t make sense, that’s the biggest thing. Sawyer was never the kind of person to draw enemies,” said Storey.

According to a search warrant affidavit, Edmond police entered English's home and found him dead.

"They noticed what they believe to be three bullet entrance wounds in the back," the affidavit states.

In addition to seizing evidence of the murder from the home, investigators say they also seized cash, medical cannabis and a surveillance camera system from the house.

Now, officials with the Edmond Police Department say two people were arrested in connection to English's murder. Edmond investigators told News 4 the suspects are a man and a woman, and they were taken into custody in Florida.

Authorities say on July 11, they learned that 37-year-old George Stewart Watson shot English through the window of his home while another suspect, 37-year-old Lindsi Mae Mayabb, waited in the car. 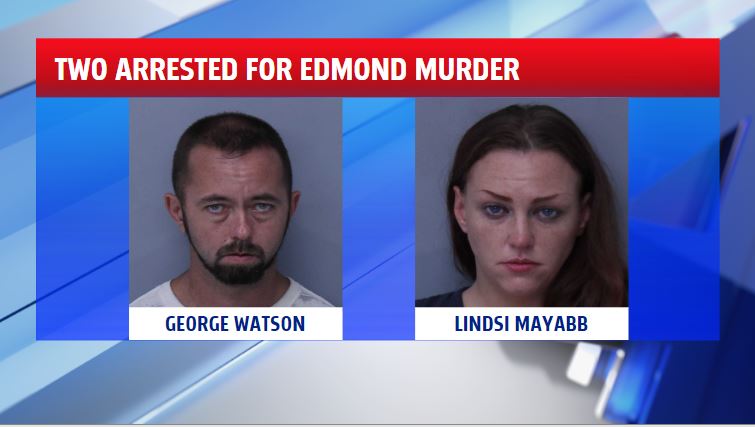 Authorities say deputies with the St. Johns County Sheriff's Major Crimes Unit were able to find Mayabb after seeing a post on an escort website. Edmond detectives went to the hotel and interviewed Mayabb.

Mayabb reportedly told detectives that Watson was upset that she was in a relationship with Sawyer English and said he wanted to shoot him. Mayabb confessed to driving Watson to English's home.

Officials say Mayabb and Watson were both arrested on complaints of first-degree murder.