OKLAHOMA CITY – A pair of twins in the neonatal intensive care unit got a surprise visit from Santa Claus!

Because they will remain in the NICU at INTEGRIS Children’s at INTEGRIS Baptist Medical Center until their lungs fully develop, they will not get to go home until after Christmas, so, they got a special visit from Saint Nick himself last week.

They decided to adopt a baby girl, Leya, two years ago and then adopted a baby boy, Dominic, a year later.

Then, the Halls got a big surprise.

When Dominic was only two months old, the Halls discovered they were pregnant, with not just one baby, but twins!

Nuncia was put on bedrest at 24 weeks gestation and spent the last 20 days of her pregnancy in the hospital.

Xavier and Vincent barely weighed three pounds each when they were born, but doctors say other than their size, they were relatively healthy! 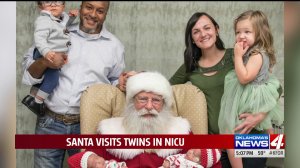