The fight against breast cancer picked up a powerful new ally – a retired US Navy fighter jet.

A Grumman F9F-8 Cougar, painted a vivid shade of pink called ‘Heliconia,’ has been unveiled on the flight deck of the World War II aircraft carrier USS Lexington, anchored at Corpus Christi, Texas. 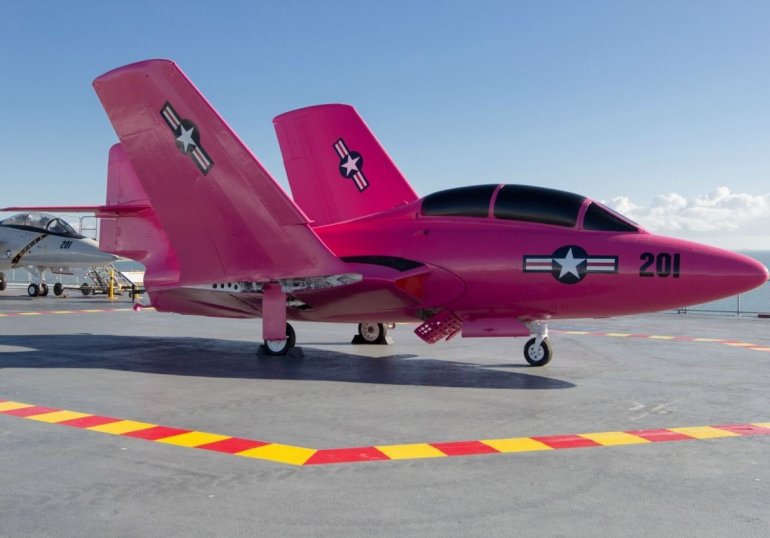 In support of Breast Cancer Awareness Month, the Cougar will be on the deck through October 31.

It won’t stay pink forever, though.

The Lexington was decommissioned in 1991 and converted to a naval aviation museum a year later.

Rusty Reustle, director of operations and exhibits at the USS Lexington museum, said he got the idea after seeing filmmakers employ the technique aboard the ship during production of the 2001 Ben Affleck film, ‘Pearl Harbor,’ KRIS reports.

This isn’t the first time Cougars have been the center of attention.

During their hay day in the 1950s, the Navy used single-seat versions of these planes to showoff their best pilots.

The Navy chose the Cougar as the first swept-wing plane for the elite Blue Angels flight demonstration team.

For their time, the single-engine jets were fast.

Military aviation geeks will tell you the Cougar’s 35-degree swept wings allowed it to go as fast as 90 percent of the speed of sound at altitudes of 35,000 feet.

In 1954, three F9F-6 single-seat versions of the Cougar flew from coast-to-coast in less than four hours for the first time.

Grumman made almost 2,000 Cougars for the Navy and Marines, according to the National Naval Aviation Museum.

They were used for various roles, including fighters, ground attack planes, photo reconnaissance and training aircraft.

During the Vietnam War, the two-seater version was used as a forward air control aircraft.

The plane is painted to look like it’s been wrapped by a giant, bright pink ribbon.

During October, flight attendants aboard the special 767 wear pink uniforms and sell pink products to raise money for the BCRF.

For 12 years, the carrier has organized annual survivor flights with women who’ve beaten the disease – including Delta employees.

The flights are nicknamed ‘Breast Cancer One.’

The program has raised $11 million for the BCRF since 2005, according to Delta, and 37 different research projects have benefited from those funds.

MINNEAPOLIS (AP) — Former Officer Derek Chauvin was justified in pinning George Floyd to the ground because he kept struggling, a use-of-force expert testified for the defense Tuesday, contradicting a parade of authorities from both inside and outside the Minneapolis Police Department.

Taking the stand at Chauvin's murder trial, Barry Brodd, a former Santa Rosa, California, officer, stoutly defended Chauvin's actions, even as a prosecutor pounded away at the witness, banging the lectern at one point during cross-examination and growing incredulous when Brodd suggested Floyd was struggling because he wasn't “resting comfortably” on the pavement.

(NEXSTAR) – The Moderna COVID-19 remains effective even after 6 months, the company said in a Tuesday update on its ongoing clinical trials.

The study looked at 33 healthy adult participants in the Phase 1 study of Moderna's vaccine at six months following the final dose.

OKLAHOMA CITY (KFOR) – The State Senate passed legislation designed to ensure that patients are better informed about health care costs upfront to help them when they choose their provider and services.

House Bill 1006, written in the Senate by Sen. Adam Pugh, R-Edmond, requires health care providers and facilities to publicize and annually update the costs of the most common health care services electronically or online, according to a State Senate news release.

Showers in the Vicinity

NCAA could move tournaments if anti-transgender bill passes in Oklahoma