OKLAHOMA CITY (KFOR) – A Putnam City student is concerned about COVID precautions at his school. He says the school isn’t taking some of the safety measures they claim they are taking.

Andy Fair is a freshman at Putnam City High School.

“Putnam City has put out like two statements saying some of the things they’ve been doing regarding COVID,” he said. “I would just like parents to know that their kids may not be as safe as they think they are.”

He sent KFOR photos of a crowded hallway during passing period, with only a few students visibly wearing masks. 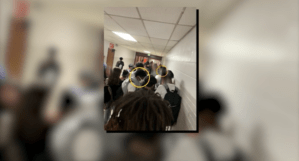 “The hallways are very, very crowded which is expected with it being really big high school. I think there is precautions that could be taken regarding that,” he said.

He also says he only knows a couple of teachers that wear masks, and that teachers are supposed to be wearing them around vulnerable students.

“Thank you for bringing this concern to our attention.  We are striving to provide the safest environment for students, employees and visitors.  When anyone has a concern about any of our buildings, we encourage them to bring it to our attention so we can act on it.  Every teacher has been provided with hand sanitizer and dispensers should be hanging on the walls in the classrooms.  In a large high school, there will be busy hallways during passing times.   We have recently changed our mask language, that it is an expectation that anyone in our buildings wear them so we can better protect the most vulnerable people who are unable to or cannot get the vaccine.  Also we announced on Monday, a stipend for employees and substitutes who are vaccinated, as another line of defense for the vulnerable population.”

Do I have fall allergies or COVID-19?

(NEXSTAR) – The Centers for Disease Control and Prevention has recorded a "significant" number of new infections amid a multi-state outbreak of salmonella stemming from an unknown food source.

(NEXSTAR) – Thinking about unloading your old video game collection for some serious loot? Here’s hoping you remembered to keep those cartridges in mint condition.

Top-quality games of yesteryear are currently selling for big bucks at auction, with such titles as “The Legend of Zelda” and “Super Mario 64” going for $870,000 and $1.56 million, respectively, at auctions earlier this year. Other popular games commonly fetch upwards of tens of thousands of dollars, depending of course on their condition and desirability.

SACRAMENTO, Calif. (AP) — California on Wednesday became the first state to bar mega-retailers from firing warehouse workers for missing quotas that interfere with bathroom and rest breaks under a new law signed by Gov. Gavin Newsom that grew from Amazon's drive to speed goods to consumers more quickly.

The measure also bars Amazon, the online retail giant, and similar companies from disciplining workers for following health and safety laws and allows employees to sue to suspend unsafe quotas or reverse retaliation. The bill applies to all warehouse distribution centers, though proponents were driven by Amazon's dominance.

Do I have fall allergies or COVID-19?

‘Since we’ve moved up here, they have really been a big help.’ Young couple returns to Oklahoma after losing jobs during pandemic, is blessed by the generosity of local church