While heavy and constant rain has caused tremendous damage in parts of the state, it has also changed Oklahoma’s position in the drought.

Earlier this year, several lakes were reaching dangerously low water levels, which were expected to have a tremendous impact on the surrounding communities.

However, that changed for most of the state after the wettest month in Oklahoma history.

The statewide average finished at 14.4 inches, according to the Oklahoma Mesonet, which is over 9.5 inches above normal.

Many individual locations shattered marks for their wettest month on record.

In all, 22 Mesonet stations recorded at least 20 inches of rain for the month of may.

According to the Oklahoma Water Resources Board, dozens of lakes’ water levels are now over the normal pool elevation.

There are still a few bodies of water that are below normal capacity.

Most notably, Canton Lake and Foss Lake are both nine feet below normal.

Click here to see the reservoir levels across the state.

In terms of the drought, the U.S. Drought Monitor says conditions have changed dramatically.

Last year, 94 percent of the state was at least in the abnormally dry category. 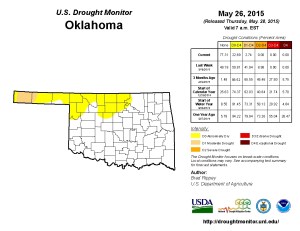 In all, 55 percent of the state was experiencing at least ‘extreme drought’ levels.

After the rainfall last month, 22 percent of the state is still listed as abnormally dry, with only two percent experiencing a moderate drought.

Fortunately, 77 percent of the state is not experiencing any type of drought at this time.

The entire state is also expected to see above normal precipitation from June to August.

Also, the center believes temperatures will be below normal and says the drought should not return this month.

Prosecutors rest their case against 2 men in Whitmer …

Instagram and Facebook suspended Children’s Health Defense this week after the anti-vaccine group led by Robert Kennedy Jr. repeatedly violated rules prohibiting misinformation about COVID-19. A nonprofit, Children’s Health Defense is one of the most influential anti-vaccine organizations active on social media, where it has spread misleading claims about vaccines and other public health measures […]

WASHINGTON (AP) — President Joe Biden and his allies hope big recent wins on climate, health care and more will at least temporarily tamp down questions among top Democrats about whether he will run for reelection. That optimism may be short lived, at risk if and when former President Donald Trump announces another White House […]

ATLANTA (AP) — U.S. Sen. Lindsey Graham has formally appealed a judge’s order requiring him to testify before a special grand jury investigating whether former President Donald Trump and others illegally sought to overturn his 2020 election defeat in Georgia. The South Carolina Republican’s appeal had been expected following a judge’s Monday ruling that he […]

As Republicans rail against the FBI in the wake of last week’s search at Mar-a-Lago, they are also hyping the danger to voters from another three-letter federal agency: the IRS.