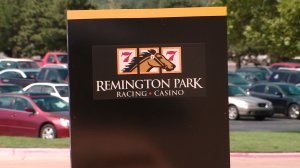 OKLAHOMA CITY (KFOR) – A horse at Remington Park was euthanized after it tested positive for Equine Herpevirus-1.

“This horse was euthanized Tuesday evening and the barn it was housed in is currently under quarantine,” the news release states.

EHV-1 is not transmissible to humans but is highly contagious between equines. It is generally passed by way of aerosol transmissions, such as coughing and sneezing, as well as contact with nasal secretions, according to the news release.

The barn that the infected horse was in will be quarantined for 14 days, and all horses kept in the quarantined barn will remain at Remington Park and will be monitored daily for symptoms.

“Additional testing will be taken if fevers arise,” the news release states.

In addition to fever, clinical signs of EHV-1 in equine include incoordination and weakness or paralysis of the hind limbs. The disease can also cause rhinopneumonitis, which is a respiratory disease usually found in young horses, and abortion in broodmares, according to the news release.

“A small percentage of equines infected with the non-neuropathogenic strain of EHV-1 can develop neurologic signs consistent with Equine Herpesvirus Myeloencephalopathy (EHM),” the news release states.

Dangerous Heat on the Way