LINCOLN COUNTY, Okla. (KFOR) – A 21-year-old Edmond woman is dead and a 26-year-old Tulsa woman is behind bars after a wreck on the Turner Turnpike.

Officials say Candace Conley was driving at a high rate of speed westbound on the turnpike and struck the rear of Mercedes Tyler’s vehicle. 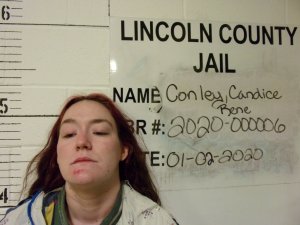 Tyler was pronounced dead at the scene from multiple injuries

Conley continued westbound for approximately 5 miles before departing the roadway to the right, the vehicle fully engulfed in flames.

Conley exited the vehicle fleeing for approximately a half of a mile before being apprehended by Lincoln County Sheriff’s Department.

Authorities confirm to News 4 she was naked when officers located her.

Officials on scene originally reported Conley as a male suspect. This story reflects the change in identity.