OKLAHOMA CITY – A wild chase that spanned more than 17 miles ended with one man in jail.

The clerk later told police a man came inside the bank with a gun and left with bag full of money. 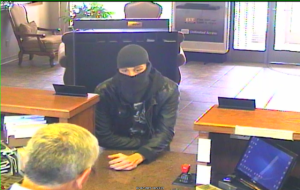 The clerk was able to describe the vehicle the man left in as a white Dodge pickup with a black stripe down the side.  That tip helped the police helicopter, Air One, spot the truck.

When police approached the vehicle, the chase began.

“Meridian is on the other side of town, so it was a pretty long chase,” said Walter Kendricks.

Kendricks and his neighbors watched it all unfold.

“I was just standing out the back there and I saw a helicopter come up. And all of a sudden, I saw police cars come out from up front. He came in from this way, so we didn’t see him come past the house,” said Kendricks.

Wilson was eventually taken into custody near S.E. 59th and Post Rd.

“I was outside talking to a friend on the phone and I heard a helicopter come around and I looked up and saw it come around again. It said police and I thought, ‘What’s going on?’ So I walked out here,” said Heather Funk.

Just a few feet away from Kendrick’s front door is where Oklahoma City police officers arrested their man and found the money. They also recovered the gun they say he used to rob the bank.

Wilson will be booked into the Oklahoma County Jail on eluding and robbery-related charges.

2 escapees back in jail after 4 days as fugitives

2 escapees back in jail after 4 days as fugitives

Manufacturing jobs at highest since 1970s

Taco Bell fans can vote to bring back discontinued …

Police chase ends with one in custody

Funds to aid Jackson’s water system held up as governor …

WASHINGTON (AP) — The Pentagon will deliver the first two advanced NASAMS anti-aircraft systems to Ukraine in the next two months, providing Kyiv with a weapon that it has pressed for since earlier this year. Air Force Brig. Gen. Pat Ryder told Pentagon reporters on Tuesday that six more of the Norwegian-developed weapons will be […]

The Biden administration is rolling out a new rule that would require airlines to be upfront about all the fees that factor into the cost of your ticket.

WASHINGTON (AP) — Senate Republican leader Mitch McConnell said Tuesday he will “proudly support” legislation to overhaul rules for certifying presidential elections, bolstering a bipartisan effort to revise a 19th century law and avoid another Jan. 6 insurrection. The legislation would clarify and expand parts of the 1887 Electoral Count Act, which, along with the […]

TOKYO (AP) — Armed with a new law that boosts U.S. support for computer chip manufacturing, Vice President Kamala Harris is seeking new investments and partnerships as she sits down with Japanese technology executives. Harris was meeting with the CEOs on her last full day in Tokyo on Wednesday, a reflection of the administration’s focus […]

Manufacturing jobs at highest since 1970s

Taco Bell fans can vote to bring back discontinued …

Large crash shuts down I-35 traffic in Noble Co.

Police: Man shot, killed after car broke down in …