OKLAHOMA CITY – A resolution that asks Oklahoma officials to treat abortion as murder has passed the House of Representatives.

House Resolution 1004 directs “every public official in Oklahoma to exercise their authority to stop murder of unborn children by abortion; directing Oklahoma judges not to interfere with Legislature’s right to clarify Oklahoma criminal law; and directing distribution.” 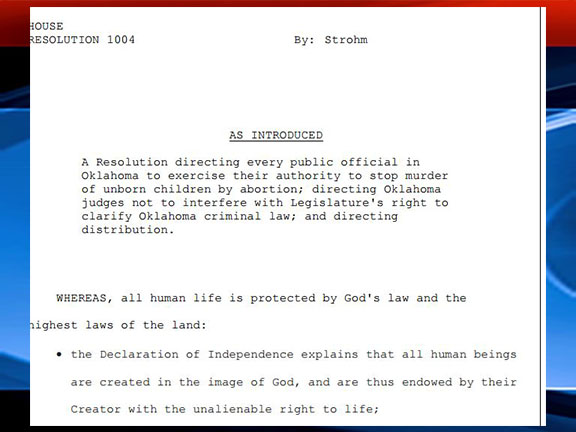 The resolution states that “all human life is protected by God’s law,” adding that the Constitution mandates that “no state shall deprive any human being of life, liberty, or the pursuit of happiness without due process of law.”

It goes on to say that elective abortions do just that.

Originally, the resolution said that “the Supreme Court of the United States overstepped its authority and jurisdiction by offering opinions in Roe v. Wade, Planned Parenthood v. Casey, and other abortion-related cases.” 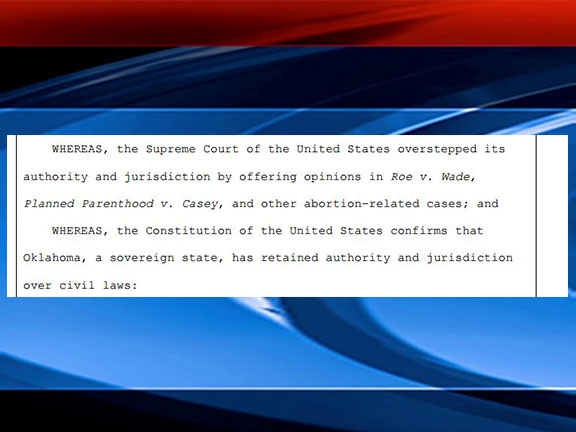 However, it has since been amended to say “the Supreme Court of the United States overstepped its authority by federalizing the issue of abortion on demand which should have been properly left to the province of each state.”

The resolution, authored by Rep. Chuck Strohm, goes on to direct “every public official in Oklahoma” to exercise their authority “to stop the murder of innocent unborn children by abortion.”

According to the Tulsa World, the resolution passed the House on a voice vote Monday afternoon.

The resolution is considered a statement of policy and does not carry the weight of the law, the Tulsa World reports.

SAN DIEGO (KSWB) - San Diego police investigators have ruled the death of a woman who fell from a third-story stadium concourse last fall at Petco Park while holding her 2-year-old son a murder-suicide.

Investigators say they conducted dozens of interviews and reviewed background information and available video footage of the Sept. 25 incident that killed San Diego residents Raquel Wilkins, 40, and her son, Denzel Browning-Wilkins. It happened just before a Padres game against the Atlanta Braves.

OKLAHOMA CITY (KFOR) - The Oklahoma attorney general has joined a coalition to ask the Occupational Safety and Health Administration to withdraw its COVID-19 mandate for large employers.