AUSTRALIA (CNN) – The contrast in two satellite images, taken six months apart, provides one more chilling portrait of some of the worst fires Australia has faced in decades. 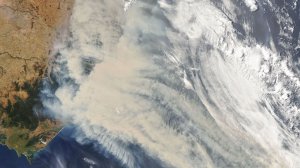 Back in July, NASA snapped photos of an area area near the southeastern tip of Australia which showed vast green areas, vibrant with life.

On Friday, NASA shared the photos captured by the agency’s Operational Land Imager aboard its Landsat 8 satellite. That satellite is dedicated to providing detailed images of the entire Earth’s surface on a continual basis.

The pictures show an approximately 90-mile stretch along the southern Australian state of Victoria, between the coastal cities of Mallacoota and Orbost.

That view was green and lush in images captured July 24. By New Year’s Day 2020, the same image area was obscured by tan smoke billowing up into the atmosphere from the wildfires.

State officials also declared a “tourist leave zone” extending down to the New South Wales’ border with the state of Victoria. Mallacoota, the town marked at the top of NASA’s images, is on the Victoria side of the border.

Meanwhile, NOAA released some wider shots of the whole Earth, highlighting the caramel-colored smoke off Australia as it swirled into white cloudy formations spinning in the South Pacific.

A record-setting heatwave struck Australia in December, during the Southern Hemisphere’s summer months. That, combined with one of the worst droughts to plague the country in decades, helped cause the deadly infernos that have engulfed entire towns and taken 18 lives across the country.

The letter was intercepted at a government facility that screens mail addressed to the White House and President Donald Trump, the official said. A preliminary investigation indicated it tested positive for ricin, a poison found naturally in castor beans, the official said.

Below, find a collection of celebrities' condolences so far: