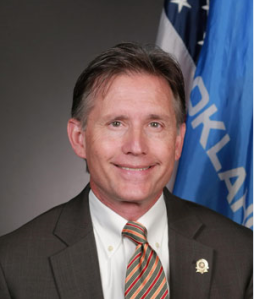 Hunter succeeds Scott Pruitt, who resigned after being confirmed by the U.S. Senate to become administrator of the Environmental Protection Agency.

Before that, he served as first attorney general under Pruitt.

He begins his new duties immediately.

“Mike understands the law and has a thorough understanding of state government, which will serve him and the state well,” said Fallin. “Mike also understands the importance of public service and he will be a tremendous advocate to protect the basic legal rights for Oklahomans.”

Hunter served as first assistant attorney general for Pruitt from June 2015 until October, serving as chief legal adviser and overseeing a staff of over 200 lawyers, law enforcement agents and support staff.

“I appreciate the confidence placed in me by Governor Fallin,” he said. “I enjoyed working in her administration, and look forward to continuing to assist whenever possible to improve our state.”

Pleased to name Secretary of State Mike Hunter as Oklahoma attorney general.He will do a great job. https://t.co/py4d0j6ydZ

Urgent call for blood donations in response to Hurricane …

Florida deaths rise to 47 amid struggle to recover …

Ian shows the risks and costs of living on barrier …

WASHINGTON (AP) — U.S. officials celebrated in early September when top allies agreed to back an audacious, never-before-tried plan to clamp down on Vladimir Putin’s access to cash as he wages war on Ukraine. The idea sounded simple enough: The countries would pay only cut-rate prices for Russian oil. That would deprive Putin of money […]

WASHINGTON (AP) — The National Archives and Records Administration informed lawmakers that a number of electronic communications from Trump White House staffers remain missing, nearly two years since the administration was required to turn them over. The nation’s record-keeping agency, in a letter Friday to the House Committee on Oversight and Reform, said that despite […]

UNITED NATIONS (AP) — An 85-year-old Iranian-American who formerly worked for the U.N. children’s agency and was detained in Iran in 2016 has been permitted to leave the country for medical treatment abroad, the United Nations said Saturday. U.N. spokesman Stephane Dujarric announced the departure of Baquer Namazi and said Secretary-General Antonio Guterres was grateful […]

ATLANTA (AP) — When Democrat Stacey Abrams narrowly lost the Georgia governor’s race to Republican Brian Kemp four years ago, she didn’t go quietly. She ended her campaign with a nonconcession that acknowledged she wouldn’t be governor, while spotlighting her claims that Kemp had used his post as secretary of state to improperly purge likely […]