Hail, straight-line winds and flooding were the major threats from the storms.

According to the Oklahoma City Fire Department, they responded to more than 30 calls around the city due to weather.

WEATHER: OKCFD responding on numerous calls around the city due to weather. We are on 3 water assist (vehicle in high water) calls: 1) 8900 S. Western, 2) 16000 N. Sara, 3) SW. 23 / May. Please do NOT drive into high water. We have also worked numerous vehicle accidents. Be safe! 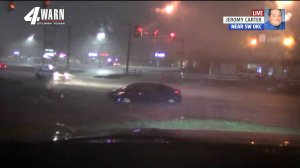 15 total calls (so far) to assist motorists stranded in high water. Many of these people were frightened, cold, and wet; not to mention the damage to the vehicles. PLEASE find an alternate route or simply get off the roadway and sit in a safe spot until the water subsides. 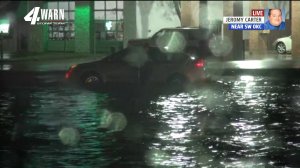 Good news: We have a report that five people (including 9 month-old baby) who were reported to be trapped in their storm shelter were able to get out. This was in the 300 block of SE. 47th St. -BF 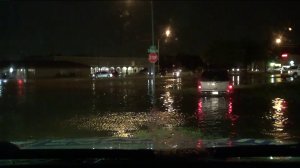 Oklahoma City fire crews also had to extinguish a fire at a home in the 17300 block of Boreal Court just before 4 p.m. after the homeowner reported his house had been struck by lightning.

An investigation revealed the house was struck by lightning near the chimney. Fire officials say the electrical current followed a gas line, which caused a fire in the wall behind the fireplace.

Firefighters had to remove part of the interior wall to gain access to the area where the fire started. Crews were able to extinguish the small fire with water cans. There were no reports of any injuries.

A severe storm near the Will Rogers World Airport also caused flight delays and diversions.

#okwx update: The airlines have done a great job of keeping flights moving in heavy #OKC t-storms. But as delays lengthen and rain continues to fall, cancelations are expected. Continue to closely monitor updates from your airline and don’t drive thru high water on flooded roads. pic.twitter.com/Syaqz4Zdqg

Storms are expected to continue moving across the state throughout Tuesday evening.

According to the OG&E outage map, more than 5,000 people are without power.

Crews are working to restore power.