CHICKASHA, Okla. -- A woman is arrested in Chickasha after allegedly getting high in Walmart.

She's accused of 'huffing paint,' but she reportedly told police she was just checking the paint color.

"Inhaling some type of substance like that could coat your lungs," said Interim Chief Shannon McClain, with Chickasha Police. "It could actually kill you."

It was spray paint, stacked high on Walmart shelves, that ultimately led to the woman's arrest.

"There was an individual that appeared to have been huffing paint inside the store," explained McClain.

It was just after noon on Monday that police got the call. 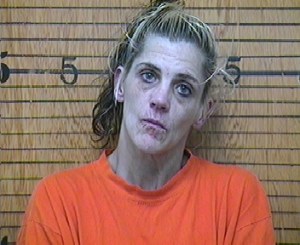 "She'd been spraying numerous cans of spray paint into the air, and onto her clothing, and then smelling the paint in an attempt to get high," said McClain. "She seemed to be a little oblivious as to who was watching her."

Reports show Young was pretty preoccupied with the paint.

Employees allegedly found Young sitting cross legged, with a thick smell of paint the air and cans littering the floor.

"She said she was trying to determine what color the paint was," noted McClain.

Young explained to police that the paint was to be used to paint her friend's house.

That chore will now have to wait, as she sits in the Grady County Jail for larceny of merchandise, and public intoxication.

As for Walmart, the police report shows they had to 'damage out' three cans, equaling a loss of $10.88.