OKLAHOMA CITY (CNN) — A strong winter storm is forecast to impact much of the country this weekend, delivering a blast of snow, freezing rain and sleet from Nebraska to Maine. 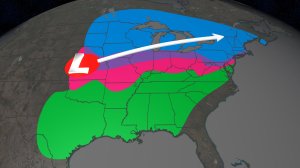 As of Friday afternoon, about 118 million people across the country were under some kind of winter storm warning, advisory or watch, CNN meteorologist Monica Garrett said.

“This has the potential to be one of the most impactful winter storms of the season for the Upper Midwest,” CNN meteorologist Taylor Ward said.

The storm system was expected to get organized later Friday and intensify on Saturday, the National Weather Service said.

The weather was already affecting travel.

Ice prompted a temporary closure at Kansas City International Airport in Missouri, where a plane slid off the pavement, an airport spokesman said. There were no known injuries.

In Guymon, Oklahoma, the ice was so slick that resident Kassidy Stroup couldn’t stand up in her driveway. She shared a video of her futile struggle to open the door to her truck as she slid this way and that on the icy path.

Stroup planned to head into work later, she told CNN, after the ice had thawed a bit.

Jenni Pittman, who works for the National Weather Service, shared a time-lapse video of icicles forming off the roof of her home in Olathe, Kansas, on Friday morning.

Pittman was teleworking, she said, but her husband said the roads were “just barely passable.”

Timing and impacts through the weekend
Friday

“After the storm moves out, the bitter cold will settle in. High temperatures in the region will remain in the single digits Sunday and into the early part of next week, while overnight temperatures will dip to 10 to 20 degrees below zero,” according to Ward.