COYLE, Okla. (KFOR) – The population in Coyle, Oklahoma is estimated to be around 360, but a famous face will be in the small town in the next week or two.

Crews have been working throughout Oklahoma over the last few weeks, shooting Matt Damon’s upcoming movie ‘Stillwater,’ and Coyle’s turn is coming up.

Work is already being done to make the town’s Main Street look like it was hit by a tornado.

As it turns out, Coyle is no stranger to Hollywood.

“It resembled a ghost town,” said Coyle Public Schools Superintendent Josh Sumrall. “So ghost town and a tornado is what our little town looks like, I guess.”

We’re not yet sure how a tornado in Coyle fits into the movie ‘Stillwater.’

According to ‘Variety,‘ Matt Damon plays an oil-rig employee from Oklahoma who winds up in France, where his daughter is in prison for a murder she says she didn’t commit.

Community members say they can’t wait to see it.

“I’m definitely going to have to,” Maker said.

Since production started this year, Damon has been spotted in towns around Oklahoma, but this isn’t his first time in the Sooner State.

Our News 4 crew caught up with him three years ago for a movie premier as he raised funds for a local charity.

Now, Coyle Public Schools is benefiting from this movie, as their bus and ag barns will play a role.

“They said if they could use our buildings, they would make a generous donation, which they have, to the school and we’re very appreciative of that,” Sumrall said.

Though crews have to make a mess first with debris everywhere and props lined up, local business owners and residents are hopeful to see the positive impacts this movie will have on their small town.

“As you can see, our road’s been bypassed, so the town’s kind of died a little, so it’s helping clean up a lot of the buildings and things on Main Street,” said Maker.

Now as they wait for the stars to arrive, residents are excited and ready to show an Academy Award winner some Coyle hospitality.

“It’s pretty interesting that people would want to come here to shoot a film and get to experience rural Oklahoma,” said Coyle resident Josh Sawatzky.

Production will have a minor impact on traffic in town.

See the note below for further details: 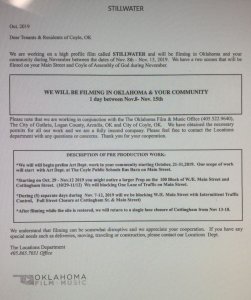