OKLAHOMA CITY — The Oklahoma Corporation Commission is ordering five wells within 10 miles of the recent Edmond earthquakes epicenters to operate at reduced volumes after a series of high-magnitude earthquakes rocked the city of Edmond.

The Oklahoma Corporation Commission released this action plan Jan. 4, after the initial quakes caused damage to nearby homeowners and businesses.

“We are working with researchers on the entire area of the state involved in the latest seismic activity to plot out where we should go from here,” Oil and Gas Conservation Division Director Tim Baker said. “We are looking not only at the Edmond area, but the surrounding area as well, including the new seismic activity that has occurred in the Stillwater area.”

On a large scale level, the Oklahoma Corporation Commission has been responding by ordering companies to well reduce disposal volumes close to epicenters, since March of 2015. What makes this one so different is there are no deep disposal wells close to the Edmond epicenters.

But broken mirrors and cracks in the walls are wake-up calls that earthquakes may be getting closer and closer.

“For all of us involved, frustration isn’t even a word, you feel just as every other resident does, that you’re being physically attacked, like you’re dealing with a living breathing thing,” Matt Skinner, spokesperson for the Oklahoma Corporation Commission said.

Skinner compares the quakes to a monster shaking the Oklahoma land, now the Commission scrambling to try to put a stop to the quakes.

“For now what we have is a ring, rings that are three, six and 15 miles which is farther than we normally go, from the seismic activity that occurred in Edmond,” Skinner said.

Basically what they’ve done is asked those well 3 point five miles away from the epicenters to reduce disposal by 50 percent, those 10 miles away, reduce by 25 percent. 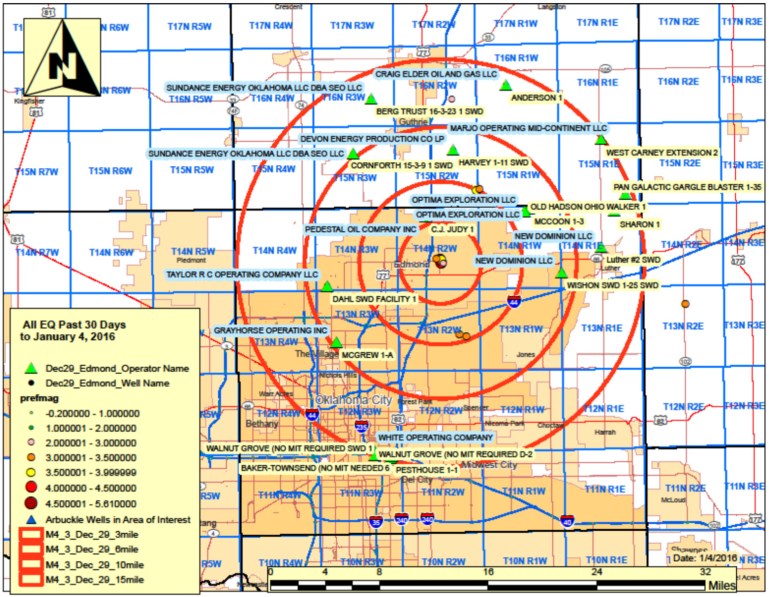 “And then we’ve gone out 15 miles which is unusual, but because we have so few wells in the area and because we have no wells that are high volumes wells, we have gone farther out and we’re going to be doing reservoir tests,” Skinner says.

But they say it’s a shot in the dark with the latest Edmond quakes.

But an order a stop to all wells in the state is something that’s just not possible at this time.

“Look, all options are always on the table, a moratorium in terms of just turning everything off, is something that we’ve been advised legally, given where the situation, but most are operating in areas of no earthquake activity, would not be something that is legally viable,” Skinner said.

“We are working with researchers on the entire area of the state involved in the latest seismic activity to plot out where we should go from here,” OGCD Director Tim Baker said. “we are looking not only at the Edmond area, but the surrounding area as well, including the new seismic activity that has occurred in the Stillwater area.”

The state has been issuing directives since March of this year after new data has been received from oil companies.

Operators of the C.J. Judy and the Harvey disposal wells, Pedestal Oil and Devon Energy, have both agreed to suspend operations to help aide the state in more research.

The Commission says they are working with researchers, and looking at options to expand the plan from Edmond to Stillwater which has also seen an increase in quake activity.

Representative Richard Morrissette is hosting a public hearing at the capitol next Friday at 9am to discuss citizens concerns about the quakes.

OKCPD: Man posed as a petitioner before shoplifting