OKLAHOMA CITY – Following a cold night and overnight house fire, the Oklahoma City Fire Department is reminding the public that as temperatures fall, fires may happen more often, but can be prevented.

According to the department, firefighters battled a house fire just after 12:30 a.m. Friday near SW 44th and Walker that was likely caused by an unattended candle.

“The moment it starts getting cooler out, we always have more fires. Space heaters, fireplaces, candles, and overloaded outlets are common culprits this time of year,” said fire officials on Facebook.

Fire officials say five people were in the home when the blaze started. The fire was small and in a garage that had been converted into a living space.

A candle had been burning in the area where the fire began and may have started the blaze.

All five people are OK, the department says.

Damage estimates are approximately $1,000 due to smoke damage.

Fire officials say you should always blow out candles when you leave a room or go to bed. They say the best option is to not use candles, and consider a flameless candle instead. 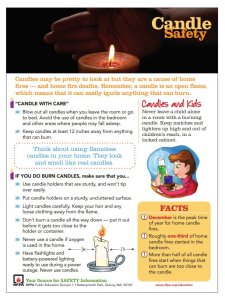 It’s also recommended you turn off space heaters when you leave a room or go to bed.

And, it’s best to have your fireplaces inspected and cleaned by a qualified chimney sweep specialist before use.

As always, have working smoke alarms and practice your escape plans.