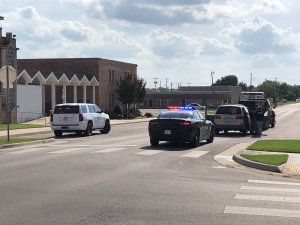 STROUD, Okla. — Stroud police are investigating a double homicide after a couple was found dead inside their home Tuesday morning.

Shawn Pittman, 39, has been identified as a person of interest in the deaths of his parents 65-year-old Mark Pittman and his wife 63-year-old Pauletta Pittman. He was arrested early Tuesday evening.

A coworker of Pauletta Pittman contacted authorities on Tuesday after she did not show up for work at Miller Line Trucks. Their office confirmed to News 4 on Tuesday, Pauletta had been employed there for 13 years in the payroll department.

When police conducted the welfare check, they found the bodies of Mark and Pauletta Pittman inside their home on W. 10th Street in Stroud.

Shawn Pittman has been identified as a person of interested because he lived at the home, Stroud police said Tuesday. Around 5 p.m. Tuesday, investigators received a call that a Sienna mini-van matching the description of the one owned by Pauletta Pittman was getting gas at a station in Stroud.

A second call reported that the mini-van had left the gas station. Based on the information received from the callers, the Stroud Police Department was able to locate the vehicle driving westbound on 4th Street and pulled it over.

Shawn Pittman was driving the mini-van and he was taken into custody by the police department. He is facing DUI charges and is being held at the jail in Stroud.

Those who knew Pittman described him as “easygoing.”

“Friend of mine, it was his son in law and I got acquainted with him there,” said nearby neighbor Charlie Johnson. “It was quite a shock to us. Everybody was wondering what went on.”

Chief Clint Gaylord with the Stroud Police Department said Pittman was no stranger to them, as they have responded to the home several times in the past for disturbances.

“Along with some alcohol-related issues,” Chief Gaylord added.

As of Tuesday, there has been no information released pertaining to the cause of death for either victim.

What does ‘Latinx’ mean and why would you use it?