OKLAHOMA CITY (KFOR) – A car chase that turned into a foot chase Wednesday ended with a suspect arrested and a gun and stolen property seized by Oklahoma City gang officers. 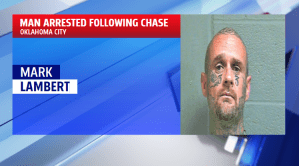 Mark Anthony Lambert, 38, was arrested on suspicion of felony eluding, receiving and concealing stolen property, possession of a firearm and other traffic complaints, according to Sgt. Megan Morgan with the Oklahoma City Police Department.

OKCPD gang officers attempted to make a traffic stop in the area of Interstate 40 and Meridian at approximately 10:30 a.m. The driver pulled over briefly, but then drove off, forcing police to chase him, according to Morgan.

The suspect drove eastbound on I-40 and exited the interstate at Agnew, and then headed south.

The chase then moved through Will Roger Courts and went south on Mckinley.

“The pursuit ended on the dead-end at SW 13th and McKinley when the suspect exited the vehicle and fled on foot,” Morgan said. “He was quickly apprehended by the officers involved in the pursuit.”

After police apprehended Lambert, they searched his vehicle and recovered a firearm and stolen property.