Skip to content
This is an archived article and the information in the article may be outdated. Please look at the time stamp on the story to see when it was last updated.
OKLAHOMA CITY — Two suspects were arrested Tuesday after a chase ended in a southwest Oklahoma City neighborhood. The chase began just before 10:20 a.m. Tuesday, when officers tried to pull over a red SUV around S.E. 54th and Huddleston St., near Sunnylane. According to Lt. Phil Martin, with the Oklahoma City Police Department, the chase was initiated by the gang unit. “The initial was just a traffic stop. They did throw out some narcotics during the pursuit. We recovered a little bit of marijuana but that was it,” Lt. Martin said. “The pursuit lasted several minutes.” The suspects have been identified as 42-year-old Cory Williams and 42-year-old Alvin Johnson. 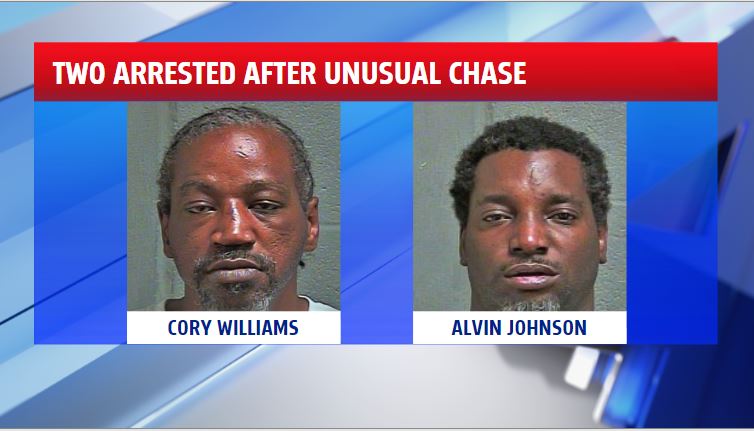 Ground units were cancelled at one point during the pursuit, and Air One was brought in. “That’s the idea. Once we stop pressuring them, pursuing them that they’ll stop driving erratically and everyone can follow them and eventually they’ll stop, thinking they’re not being followed anymore,” Martin said. “It worked out perfectly. This is the ideal situation. No one got hurt. No wrecks, and there was no incident in the end. They gave up peacefully.” The chase ended near S.W. 48th and Drexel Ave. in the middle of neighborhood, which one neighbor described as ‘quiet’. “I was watching the Today Show and it came on, and I watched the whole thing and it ended right here, and I was like ‘what in the world?’ Because he was at CashSaver and he turned down the street, I was like…’oh my god, that’s our street,'” she told us. “We just heard the cops say, like get out of the car and get down and they did. They abided, like everything they said.” Johnson was booked into the Oklahoma County jail on several complaints, including a felony charge of ‘aggravated attempt to elude a police officer’ and marijuana possession. According to the Oklahoma County Sheriff’s Office, Williams is currently in their system with a municipal charge.
35.46756-97.516428