HASKELL, Okla. – Two teens are wanted by the Oklahoma State Bureau of Investigation in connection with a burglary that turned into a shooting in Haskell in July. 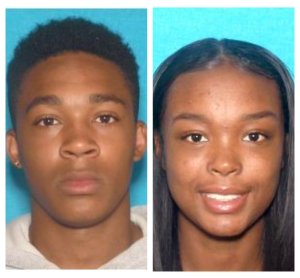 Phillip Jones and Jaysea Williams are both wanted on felony warrants out of Muskogee County for suspicion of first-degree burglary and conspiracy. Jones is also wanted on suspicion of possession of a firearm during the commission of a felony, according to an OSBI news release.

OSBI investigators believe that Jones and Williams, along with three others, were involved in a shooting at a residence in the 300 block of West Hickory in Haskell on July 30.

Jones and Williams, along with Jobe Terronez, Jakeyvious Key and Colton Edwards, all 18 years old, attempted to kick in the door of the residence, resulting in a gunfire exchange with the homeowner, according to the news release.

“The five suspects were injured in the incident, but were treated and released from the hospital. The homeowner wasn’t injured,” the news release states.

Terronez was arrested on July 30 on suspicion of first-degree burglary, conspiracy and possession of a firearm during the commission of a felony.

Key was arrested on July 31 on suspicion of first-degree burglary and conspiracy.

Edwards turned himself in to the Muskogee County Jail on Aug. 5. He is accused of first-degree burglary, conspiracy, shooting with intent to kill and possession of a firearm during the commission of a felony.

OSBI officials ask that anyone with information on Jones and Williams contact OSBI offices by either calling (800) 522-8017 or emailing tips@osbi.ok.gov. Tipsters can remain anonymous.