WEATHERFORD, Okla. (KFOR) – A Southwestern Oklahoma State University professor who had a profound impact upon students will be honored with the dedication of a physics wing in his name. 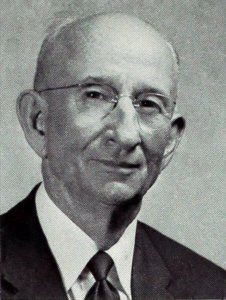 The ‘Professor J.R. Pratt Physics Wing’ will be dedicated during a ceremony at 3 p.m. Friday. The ceremony will be held in Room 116 of the Chemistry Pharmacy Physics Building on the SWOSU campus.

The ceremony will include the unveiling of a plaque honoring the impact Pratt had on his students. A reception will follow.

“Several college professors always hope that they can encourage their students to reach higher, but one professor in particular in the SWOSU Physics Department encouraged his students to go for the moon,” the news release states.

Pratt served as the Southwestern State College Department of Physics’ chair from 1928 to 1964.

Pratt, a World War I veteran, was described as a tough, but fair instructor.

“Wearing a navy blue suit and tie every day to class, Professor Pratt instructed his students to ‘pay close attention and never forget the details of a situation.’ He was a man of observation and meticulousness, important characteristics that would be passed on into the work ethic of his students,” the news release states.

It was Pratt’s guidance that helped many of his students reach the stars.

Pratt saw an ad in a local newspaper announcing job openings at the then-new NASA Mission Control Center in Houston.

“Sharing this information with his students, Pratt encouraged them to pursue the chance to put their skills to work. Following their instructor’s advice, over 20 graduates left Weatherford and went to work for NASA and Mission Control,” the news releases states. “Some of these graduates became essential key personnel in helping save missions such as Apollo 12 and Apollo 13.”

Oklahoma became a strong presence in U.S. space history, “but the great state also has a presence in Mission Control thanks to Professor Pratt.”

Pratt’s legacy of enriching the lives of students endures through his scholarship, the J.R. Pratt Physics Scholarship, established in his honor by alumni, faculty and faculty emeriti.

The SWOSU Foundation recently announced a fundraising campaign named “LAUNCH!” to encourage gifts to be made in honor of Pratt and other current scholarship funds for the SWOSU Physics Department.

OHP investigating cause of deadly crash in Woodward County