OKLAHOMA CITY – Employees of an Oklahoma City Taco Bell called police early Tuesday morning to report a woman who was chasing them around the store with what they thought was a crowbar.

They said the woman was threatening them and demanding money, as she allegedly destroyed the cash registers with the weapon.

Police said 52-year-old Zette Madden also walked around the building smashing the glass in entrance doors and the drive-thru window as well as the drive-thru menu, causing thousands of dollars in damages. 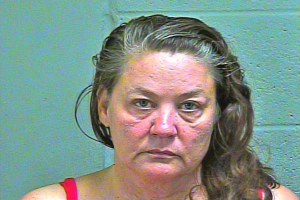 When Officer Phillip Paz arrived at the Taco Bell, located along the I-35 service road near S.E. 29th St., police body cam video captured Madden standing on the other side of the smashed glass.

Paz told Madden seven times to drop the weapon, which he then identified as a tire iron.

A large baseball-sized rock was also seen on the floor next to Madden.

Madden ignored his repeated demands, opened the shattered glass door, then yelled out “I come in here and spend hundred of dollars, but the (expletive)” – the officer didn’t give her a chance to finish her sentence, writing in his report he feared Madden would again turn back to threaten employees.

The officer said, after being tased, Madden was cooperative and transported to a local hospital to treat the cuts on her hands from broken glass.

Taco Bell employees have dealt with Madden in the past, when they said she trespassed inside the restaurant and allegedly tried to steal soda.

Madden remains in the Oklahoma County Jail on charges of malicious injury and destruction of property, robbery in the first degree and robbery with a dangerous weapon.

WASHINGTON (AP) – The U.S. vaccination drive against COVID-19 stood on the verge of a major new phase as government advisers Thursday recommended booster doses of Pfizer's vaccine for millions of older or otherwise vulnerable Americans — despite doubts the extra shots will do much to slow the pandemic.

Advisers to the Centers for Disease Control and Prevention said boosters should be offered to people 65 and older, nursing home residents and those ages 50 to 64 who have risky underlying health problems. The extra dose would be given once they are at least six months past their last Pfizer shot.