DALLAS — Lights flash and a bell rings. The doors begin to close. And before long, passengers are traveling at 35 mph, gliding over the Trinity River.

It’s only the first, short stretch of the city’s free streetcar system, but Oklahoma City leaders are sold on the potential of their own, yet-to-be-built route.

Dallas officials are quick to tell you, the project was the right decision.

“There’s a lot of excitement that’s already been generated,” said Mark Rauscher, Dallas’s Interagency Transportation Administrator. “We feel like their ís going to be a lot more excitement as far as generating tourism and redevelopment and also people commuting via streetcar.”

Beginning at Union Station downtown, the American made Brookville cars come off the cables, crossing the bridge for an abbreviated route that right now ends in the Oak Cliff neighborhood, between a hospital and a Mexican restaurant. 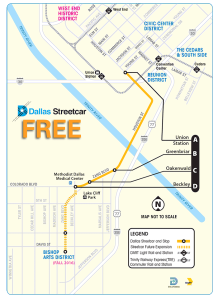 In all, it’s only a 1.6 mile trip — 20 minutes or so from end-to-end. But the goal is to reach the up-and-coming Bishop Arts District. Phase two of construction is set to wrap up this summer.

“It’s kind of like that build it and they will come model,” said Rauscher. “This is the right move.”

People who follow development in Dallas will tell you there’s no such thing as an uncontroversial project. But those who know the city’s plans the best also say the streetcar was one of the easier sells.

Not so in Oklahoma City, where crowds showed up at city council meetings to protest what they saw as an unnecessary waste of taxpayer money. OKC’s modern streetcar is part of MAPS 3 plans, connecting a new park and convention center to the rest of the city. 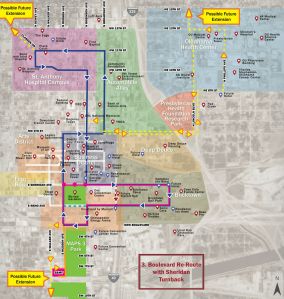 For $129 million, the city plans to construct about 7 miles of track. One loop will circle the Myriad Gardens, hitting Bricktown, the Chesapeake Arena and the new MAPS park. The other, longer loop will travel up Automobile Alley to the St. Anthony Hospital campus.

Crews plan to break ground this year, with the hope of getting the project online by 2018.

After disagreements with its original vendor, and after consulting the City of Dallas, Oklahoma City leaders elected to enter contracts with Brookville too.

Since the project was launched, the city has arranged to buy extra streetcars to fit its needs.

The Dallas project is shorter and therefore less costly, coming in at around $45 million and partially funded by federal grants. (Oklahoma City was ineligible for those federal grants because it didn’t already have a light rail system as Dallas does.)

“It’s worth the cost because of the economic redevelopment it brings, also the positive impacts it has on mobility,” said Rauscher. “It enables the people to chance to get around and leave their car at home.”

Rauscher insists ridership is where it should be, but acknowledges it stands to grow as the summer goes on and phase two is completed.

When NewsChannel 4 visited on a Thursday afternoon, travelers were hard to come by.

“it’s a nice large train but aside from us there are only two people on it right now,” said Mark Lamster, an architecture critic for the Dallas Morning News. “And i think that’s the problem with these transits: not necessarily the design of the train, it’s because of the route that we’re not getting the traffic we want to.”

As far as the streetcar itself goes, Lamster is impressed.

The windows are large (though the front windows behind the driver could be bigger), the seats padded and comfortable and the design modern and aesthetically pleasing.

“We have this really nice piece of rail line, but we’re not getting the ridership on it that maybe we would hope at the moment because it’s maybe not fully connected to a city,” said Lamster. “The issue is, it doesn’t seem to go anywhere yet.”

The car starts at Union Station, a hub that connects to light rail and Amtrak trains and ends in what Rauscher expects to be an up-and-coming area. The two stops in-between are clearly still developing, dotted with newer apartment complexes.

Developers already have plans to add retail and housing along the line, something the city sees as a major plus.

“They’ve realized that young people want to live somewhere they can work and play and not always have to get in the car,” Rauscher said.

The city is already looking into ways to extend the line further in the future. Rauscher’s best advice to Oklahoma City is to be patient and stay focused on the long-term goal.

“You might have some naysayers, but I’d just say stay the course,” he said. “You’ll reap the rewards what the investments been made.”

And as far as the critics are concerned, Oklahoma City would be well served to make sure its routes are convenient, well signed and well advertised.

“Bus routes and timing schedules mean a lot,” Lamster said. “The reliability of the system, the trustworthiness of the system, people know how it works and can rely on it and then use the system because of that.

Though Lamster says it would be unfair to judge the system before it’s finished, he can already see ways for Oklahoma City to improve as it prepares to break ground this year.

OKLAHOMA CITY (KFOR) – Officials say more than half of the state is listed under the 'moderate' risk category for the spread of COVID-19.

The Oklahoma COVID-19 Alert System is designed to give community members and local officials a method by which they can recognize and communicate COVID-19 risk levels in each county and guide health behaviors.

On Friday, data from the Oklahoma State Department of Health shows that the state has had 82,520 confirmed cases of COVID-19 since March.

The celebration featured a parade, an honor guard and several proclamations. As police cars passed, Newman saluted each one.