GLENWOOD SPRINGS, Colo. – The man accused of slitting the throats of his 3-month-old son and wife in Texas on December 15, 2016,  was arrested Wednesday night in Colorado.

“This is just shocking,” one neighbor told KTVT. “This is a quiet neighborhood. We don’t have any problems, not even any thefts that I know of.”

Craig Alan Vandewege, 35, denied knowing anything about their deaths, and was let go after being questioned.

According to KDVR, the family had recently moved from Texas to Colorado. 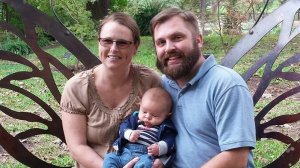 On December 21, 2016, police in Glenwood Springs received reports of a man acting suspicious at a gas station, said the Fort Worth Police Department.

“It’s been a long week. My wife and kid were murdered in Texas,’ said Vandewege in an arrest affidavit.

Fort Worth police were contacted and said Vandewege was still a person of interest in the case.

That’s when Glenwood Springs police arrested him for speeding and no proof of insurance.

No knives were found inside the car.

Before he was able to bond out for the speeding and lack of insurance charges, he was rearrested by Fort Worth police, which carries a $1 million bond.

Family dog, Buddy, stayed with 3-year-old boy who got lost in Florida woods

Family dog, Buddy, stayed with 3-year-old boy who got lost in Florida woods