WASHINGTON – A whistleblower has alleged that President Donald Trump solicited a foreign country to help intervene in the 2020 election and that the White House sought to cover it up. 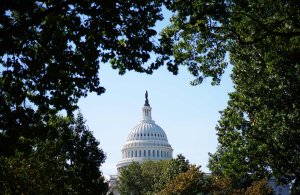 Trump has attacked the whistleblower and called those who provided the individual with information “close to a spy.” But the person who made the complaint is part of a storied American tradition of concerned individuals who felt they had a duty to bring potential wrongdoing to light.

Here’s what to know about the whistleblowing process.

What is a whistleblower?
A whistleblower is an employee who discloses information that they reasonably believe is “evidence of illegality, gross waste or fraud, mismanagement, abuse of power, general wrongdoing, or a substantial and specific danger to public health and safety,” according to the Government Accountability Project, a non-profit group that advocates for whistleblowers.

Whistleblowers can be an employee of a corporation, a non-profit organization or governments, but for the purposes of this story, we’ll focus on the whistleblowing process for federal government employees.

For legal purposes, the government defines whistleblowing as a process through which a person files a complaint through secure, designated channels — typically inspectors general or congressional oversight committees.

How does a whistleblower submit a complaint?
It depends.

For someone who works for a civil service agency, like the Food and Drug Administration or the Securities and Exchange Commission, there are several ways that a whistleblower can disclose information.

Whistleblowers can take a complaint to an authority in their agency. Some agencies, like the SEC or the Commodity Futures Trade Commission, have established whistleblowing programs through which employees can submit tips and even receive awards for doing so. Whistleblowers can take complaints to the inspector general, congressional members or their staff, and in some cases, the media.

For employees of the 17 intelligence agencies, collectively known as the intelligence community, the options are limited — both because the information they’re dealing with could be classified or because the president might want to withhold certain information from lawmakers.

How are intelligence whistleblower complaints addressed?
The Intelligence Community Whistleblower Protection Act of 1998 requires that, if the inspector general determines that the complaint is credible and of urgent concern, then the director of national intelligence “shall, within 7 calendar days … forward such transmittal to the intelligence committees.”

If the inspector general doesn’t find the complaint credible or of urgent concern, then the whistleblower can take it to Congress. But to be protected, a whistleblower would have to follow orders from the director of national intelligence on transmitting that information in a way that doesn’t compromise national security.

Is that what happened in the most recent case?
No.

The anonymous whistleblower who made the complaint about Trump’s phone call with Ukraine’s president did follow proper procedures, as acting Director of National Intelligence Joseph Maguire repeated in his testimony on Capitol Hill on Thursday.

But the complaint was not released to Congress in that time frame.

Maguire said that was because the complaint involved the President — and executive privilege kept him from releasing it earlier.

But those laws still don’t protect whistleblowers against retaliation from their respective agencies.

So why would those whistleblowers go through that trouble?
Whistleblowers come forward out of a sense of duty, David Colapinto, co-founder and general counsel of the National Whistleblower Center, told CNN.

“It takes a lot for somebody like this whistleblower, who has presumably worked in the intelligence community for some time, to decide to take the risk of what might happen to his or her career to report concerns of this magnitude,” Colapinto said.