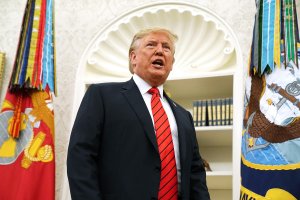 While that prospect may seem distant amid an endless series of controversial headlines — Syria! Ukraine! Impeachment! — for the President of late, a trio of new electoral models from Moody’s Analytics all predict a victory for the incumbent in 2020.

“Results from each of the three models tell equally compelling stories about what could happen on Election Day, but we hesitate to hang our hat on only one of them,” reads the report. “As a result, we average the predictions of the three models. Under the average of the three models, Trump would hold on to key industrial Midwest states and pick up New Hampshire, Virginia and Minnesota, assuming historical average non-incumbent turnout.”

All three of Moody’s models — the “pocketbook model,” the “stock market model” and the “unemployment model” — are, as you might have figured out from their names, based in some medium-to-large part on the state of the economy. And because the economy remains by most measures strong, the Moody models see Trump as a favorite.

(Worth noting: The Moody model has only missed the Electoral College winner one time in its existence. That election? 2016.)

Average the three Moody’s models and you get this: Trump with 332 electoral votes, and the Democratic nominee with 206 electoral votes. That result, if it came to pass, would be a marked improvement from Trump’s showing in 2016 when he won with 305 electoral votes.

Now, obviously, these are projections. Which means they are dependent on a series of inputs that are decidedly changeable.

The biggest one, obviously, is the economy remaining, generally speaking, on its current course. “The top of the business cycle is a difficult place from which to forecast, and the economic outlook is filled with substantially more uncertainty than usual,” reads the Moody report on the models. “Under a moderate recession scenario, in which U.S. real GDP declines cumulatively by more than 2% over the next year, the average of our three models would point to a Democratic victory.”

The other major variable that could change the outlook projected by Moody’s is turnout. All of the scenarios above are dependent on average turnout for the non-incumbent’s party. If Democratic turnout soared — and the 2018 election suggests that very well could be the case — things would change drastically. Here’s Moody’s on that possibility:

“Under the assumption that the non-incumbent share of turnout in 2020—that is, Democrats and independents—were to match its historical maximum across all states, only the pocketbook model predicts a victory for Trump. Under such a high-turnout scenario, the Democratic Party nominee would win handily under the stock market model and by the skin of their teeth under the unemployment model.”

But as Moody’s analysis makes clear, that is not the most likely scenario they see today: “Under the current Moody’s Analytics baseline economic outlook, which does not forecast any recession, the 2020 election looks like Trump’s to lose.”

This Oklahoma farmer plants vegetables with his cover crops; the produce helps feed the whole county