OKLAHOMA CITY – Tens of millions of Americans are expected to spend part of the Thanksgiving holiday on the road, and the National Highway Traffic Safety Administration is reminding motorists to plan ahead to make sure everyone stays safe.

According to NHTSA, there is an increase in crashes and fatalities around the Thanksgiving holiday. In 2017, 528 people were killed in crashes across the country during the holiday weekend, 6 p.m. November 22 – 5:59 a.m. November 27, and about half of the passenger vehicle occupants who died were not wearing seat belts.

To help everyone stay safe on U.S. roads this holiday, NHTSA is reminding the public to take the following precautions: 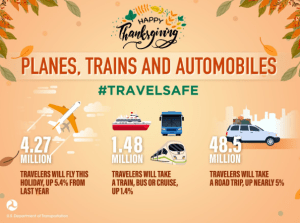