PEEBLES, Ohio. (WLWT) – A mother in Ohio says she thought it was safe when her son’s preschool handed out little bags of candy to the students.

She never expected what happened next.

Campbell said she took the box from him and started going through the other Milk Dud boxes in the bag.

Each box contained three bullets, which appear to be from a .22 caliber handgun. 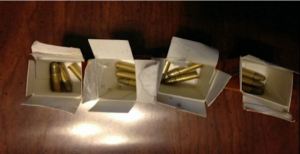 According to WLWT, Campbell was furious because the boxes of ammunition came from her son’s preschool.

Campbell says parents were asked to bring in Halloween candy to school, which was then put into bags and given to the students.

Chief Robert Music, with the Peebles Police Department, says detectives are investigating the case and the prosecutor’s office will determine if any charges are filed.

LONDON (StudyFinds.org) - For children, asthma is one of the leading causes of hospitalizations and trips to the emergency room. It’s estimated that 1 in 12 children — or about 6 million kids across the U.S. — suffer from the respiratory condition, according to the CDC. Increasing evidence shows that a healthy diet could be a potential therapy for childhood asthma. Recent research reveals that children who eat more fish may be less prone to the disease.

Studies have shown that most adult cases of asthma begin in childhood. Now, British scientists conclude that eating plenty of salmon, mackerel and sardines can decrease the risk of kids developing the illness. Scientists say that those who consume the most can cut the risk of developing the life-threatening condition in half.