WASHINGTON – President Donald Trump called a group of House Democrats “savages” — language he has previously used for terrorists and gang members — as Democrats begin revving up their impeachment inquiry into the President’s actions regarding Ukraine. 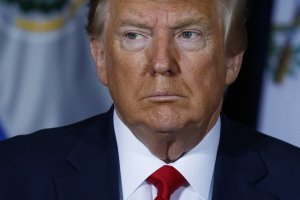 “Can you imagine if these Do Nothing Democrat Savages, people like Nadler, Schiff, AOC Plus 3, and many more, had a Republican Party who would have done to Obama what the Do Nothings are doing to me. Oh well, maybe next time!” Trump wrote.

In the past, Trump has used the word “savages” in speeches and at campaign rallies to refer to the terrorist group ISIS and the violent gang MS-13.

The President also previously targeted the four progressive congresswomen of color with racist language, suggesting “they go back” to the countries from which they came, though three were born in the US and Omar is a naturalized US citizen. His comments led the Democratic-led House in July to approve a resolution condemning his remarks.

House Speaker Nancy Pelosi announced a formal impeachment inquiry this week over the allegations that Trump attempted to pressure a foreign leader for political gain. Trump has denied that he did anything improper.

A White House transcript released this week showed that Trump asked Ukrainian President Volodymyr Zelensky to investigate former Vice President Joe Biden, a 2020 candidate, and Biden’s son. There is no evidence of wrongdoing by either Joe or Hunter Biden.

The phone call helped spark a whistleblower complaint made public Thursday, in which the whistleblower alleged Trump abused his powers to “solicit interference” from Ukraine in the upcoming 2020 election.

Tasked by Pelosi to lead the inquiry, Schiff is preparing for hearings, subpoenas and depositions as soon as next week as Democrats try to finish the probe this fall. On Friday, Trump called for Schiff’s resignation as he has also done in the past.

ROCHESTER, N.Y. (NEXSTAR) — As hunting season begins in certain parts of the country, people may have trouble finding guns and ammunition at their local retailers.

In some places, gun shop owners report a rush on supplies as people look to get outdoors this fall and winter. Because of that, stores are having a tough time keeping up with the high demand they've seen in 2020.

HOLDEN, Mo. -- A woman is dead and her husband has been charged after a shooting in Holden, Missouri, according to the Johnson County, Missouri Sheriff's Office.

Daniel Page, 30, of Holden, is charged with second-degree murder, endangering the welfare of a child creating substantial risk, voluntary manslaughter and a slew of weapon-related charges.

The airport partnered with BayCare Health System to offer on-the-spot testing inside the main terminal. The tests are voluntary and available to passengers leaving the airport or those who have just landed.

Dr. Bratzler: ICU beds filling up because of COVID-19

Driver arrested after wrong-way crash along I-40