TUTTLE, Okla. (KFOR) -- Police are searching for a carjacking suspect after a teenager's vehicle was stolen around 9 a.m. near Tuttle High School.

Thankfully, the victim was able to get away without being hurt.

"He seemed to be taking it in stride," Tuttle Police Assistant Chief Michael Scott said.

The car was found about half an hour later only a few blocks from the carjacking scene.

A neighbor tells us she heard the suspect left the car abandoned because he didn't know how to drive a stick shift. 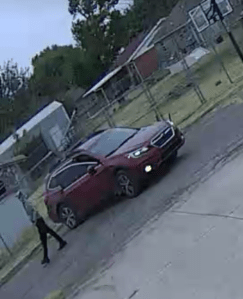 "Part of the way [police] found it was I guess the young man's cell phone was still in there, and they had pinged it and gave us a ping location," Scott said.

Tuttle High School was put on lockdown while police searched for the suspect. It was lifted after police say the man left the area, possibly picked up by a friend in a red car.

Neighbors and police say they're surprised something like this happened in what's normally an uneventful place.

"I can't remember the last [carjacking], anything like that we've had. I've been here since 2001 so it's rare, it's a pretty safe and quiet town," Scott said.

If you have any information on the suspect in this incident, call Tuttle Police.