OKLAHOMA CITY – The parents of 5-month-old twin boys were arrested on child neglect complaints after one boy reportedly suffered a heart attack and died.

Around 4 a.m. on Oct. 19, officers were called to INTEGRIS Southwest Medical Center after receiving a report of a deceased infant.

According to the affidavit, 28-year-old Secoya McNeary and 37-year-old Sirtramane Neal took the 5-month-old boy to the hospital  after he was found unresponsive in a bed with his twin brother.

Sadly, the boy was pronounced dead at the hospital.

According to an arrest warrant, the deceased child “was severely malnourished and suffered a heart attack.” The second child was admitted to the hospital for malnourishment. The report states that both boys weighed less than four pounds. 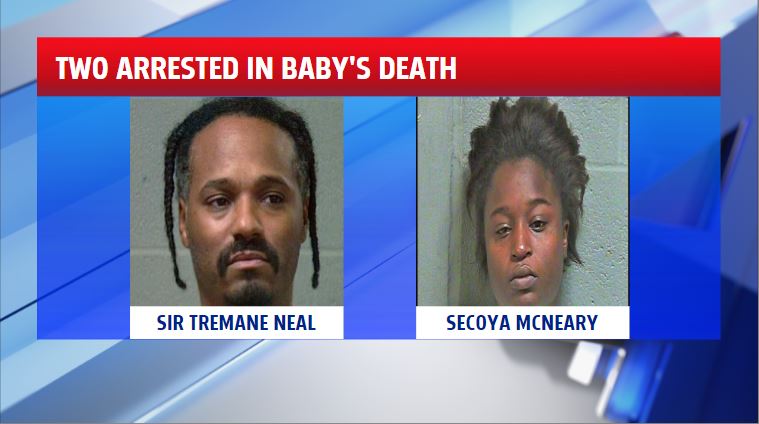 McNeary and Neal  were booked into the Oklahoma County Jail on Friday on two counts of felony child neglect.

Can you spot a flood-damaged car?

Is it safe to flush toilets during severe flooding?

Rage Against the Machine cancels tour

‘Rocky Horror’ can’t be shown in this Colorado town

OKCPS to hold community meetings for input on $955 …

What happens when my student athlete gets a concussion?

Governor’s race something to watch

Report: Mexico continued to use spyware against activists

Teen sought in ambush outside school that killed …

Judge bars enforcement of ban on guns at city parks, …

Garland is asked to probe threats to children’s hospitals

Memphis man pleads not guilty in series of shootings

Poll: Many pessimistic about improving standard of …

The best taco spots in the US, based on Yelp reviews

WASHINGTON (AP) — President Joe Biden on Tuesday spoke with Japanese Prime Minister Fumio Kishida to discuss their next steps after North Korea conducted its longest ever test launch by firing a nuclear-capable ballistic missile over Japan. The White House in a statement said the leaders condemned North Korea’s missile test in the “strongest terms, […]

The Onion files a brief with the Supreme Court. It’s …

The Onion has some serious things to say in defense of parody.

RENO, Nev. (AP) — Common sense more than any campaign strategy dictated that Adam Laxalt not trumpet his own military service in Nevada’s sometimes-heated Republican Senate primary. After all, the ex-attorney general, who served as a Navy judge advocate general in Iraq, was running against retired Army Capt. Sam Brown, a war hero who was […]

When is the Oklahoma voter registration deadline?

Governor’s race is something to keep an eye on

Rage Against the Machine cancels tour

‘Rocky Horror’ can’t be shown in this Colorado town

8 On Your Side hurricane relief telethon: How to …