OKLAHOMA CITY – Two people are facing several charges following a deadly crash that claimed the life of an Oklahoma woman and her daughter.

In April, two Oklahoma City police officers attempted to make a traffic stop at S.W. 40th and Villa. The vehicle slowed down like it was going to stop, but then quickly took off, leading officers on a chase.

When the vehicle reached the intersection near S.W. 44th St., the driver ran a stop sign and crashed into an SUV.

The family inside that SUV suffered a devastating loss.

Family members tell News 4 that Tonya Horn, her husband Eric and their 8-year-old daughter Rylee Ewald were on their way home from the vet when the crash occurred.

“They were supposed to pick the dog up at noon… but Rylee really wanted to be there for it since it is her puppy. They waited until she got out of school or got home to pick her up,” said Kimberly Grout, Eric’s cousin.

Sadly, Rylee Ewald and Tonya Horn were pronounced dead at the scene of the crash. Eric was severely injured.

The two people inside the truck, Andrew Munoz and Deanna Alvarez, were taken into custody.

Investigators say the truck they were driving was stolen, and they found drugs and firearms inside the vehicle.

Now, the pair is facing murder charges for the deaths of Ewald and Horn.

On Monday, Oklahoma County authorities filed an array of charges against Munoz and Alvarez. 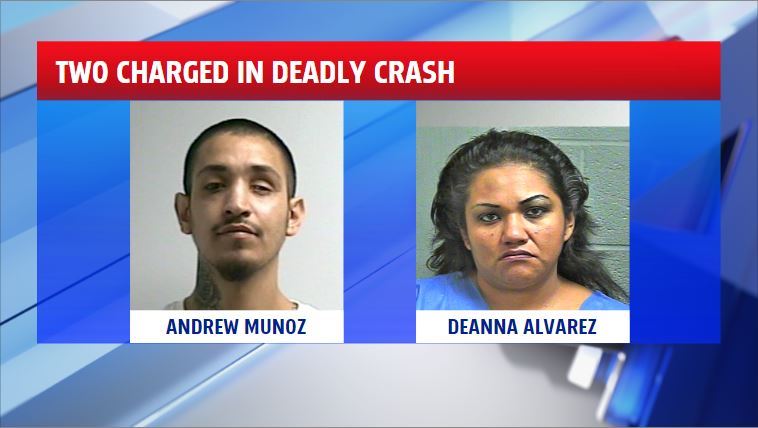 According to court documents, Munoz and Alvarez are charged with first-degree murder, trafficking in illegal drugs, and possession of illegal drug proceeds.

Munoz is also facing charges of causing an accident while driving a vehicle without a valid driver’s license, possession of a firearm after a felony conviction, and unauthorized use of a motor vehicle.

‘I knew how bad it would be’: Reproduction rights …

Oklahoma Co. GOP call for McQuillen to drop out of …

Meet ‘EF Won:’ The Oklahoma racehorse who was hit …

‘If anything we’re going to ramp it up,’ Judge strikes …

Google exec to UN: Ukraine ‘a crystal ball’ for info …

Ex-Minneapolis officer who killed 911 caller to be …

Democrats vow to help women who must travel for abortions

From joy to anger, faith leaders react to Roe’s reversal

Security is ramped up Friday night in Washington following the Supreme Court’s ruling on abortion rights.

The House passed the bipartisan safer communities act after it passed in the Senate late last night.

WASHINGTON (AP) — The House Jan. 6 committee launched under deep political skepticism: What more could be said about the deadly insurrection at the Capitol in 2021 that played out for all the world to see? Quite a lot, it turns out. The public hearings this month are showing in vivid and clear detail just […]

Guthrie voters to decide on electricity

Woman arrested after passing out during rush hour