OKLAHOMA CITY (KFOR) – A driver was seriously injured after allegedly driving the wrong way down a major interstate.

Around 1:15 a.m. Friday, authorities received a call of a pickup truck driver traveling west in the eastbound lanes of I-40 near Penn in Oklahoma City.

Officials say the driver sideswiped a BMW and then drove off the interstate at Agnew, rolling the truck in a ditch off the service road. 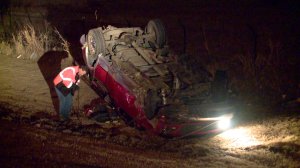 When police found the truck, there was no one inside, but they later found a man injured and nearly unconscious under the bridge at May Ave.

The man reportedly told police he was not the driver of the truck, but officers say they found his ID inside the vehicle.

The driver of the truck and BMW were both taken to the hospital. The BMW driver had non-life threatening injuries. 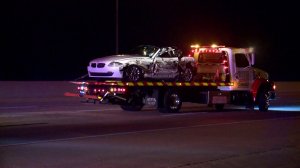 Authorities are still investigating the incident.

BIRMINGHAM, Ala. (AP) — An Alabama man who spent World War II repairing bomb-damaged trains in France recovered from a fight with COVID-19 in time to mark his 104th birthday on Thursday.

Major Wooten was physically drained and a little fuzzy mentally after battling the new coronavirus but appears to be on the mend, said granddaughter Holley Wooten McDonald.

EL RENO, Okla. (KFOR) – The driver believed to be responsible for a crash that killed four people has now been charged.

Attention has been focused on the shortage of personal protective equipment for nurses and doctors. However, housekeeping and food service workers claim there are even fewer safeguards in place for them.

Where are you in the vaccine line? NY Times tool has an estimate

Pfizer cuts 2020 COVID-19 vaccine distribution in half due to supply-chain issues, report says

Woman accused of abducting child in Arizona found in Oklahoma