GUTHRIE, Okla. – Two men accused of shooting a man dozens of times in front of a Guthrie home have pleaded guilty to charges in connection with the murder.

“The amount of times that the person was shot was very strange. There were two different calibers of shell casings that were located on scene. …that is odd. That means there’s at least two weapons and at least two shooters,” said Sgt. Anthony Gibbs, with the Guthrie Police Department.

Neighbors said Angelo wasn’t the type to get into trouble and was always willing to lend a hand.

A warrant affidavit states that the woman who lived in the home where Angelo was murdered told police she had been involved in a drug deal a few hours earlier that night.

The woman, identified as 23-year-old Rachel Smith, told police that she drove three black males to another Guthrie home, where the men tried to rob the homeowner of marijuana.

A few hours after the robbery, Smith said she was at her home with Angelo when he decided to walk home. After Angelo went outside, Smith said she heard gunshots on her porch.

Court documents state the murder may have been in retaliation for the robbery that occurred earlier that night.

Earlier this month, Bracey Perry pleaded guilty to one count of first-degree murder. He was sentenced to life in prison, with all but 20 years suspended. 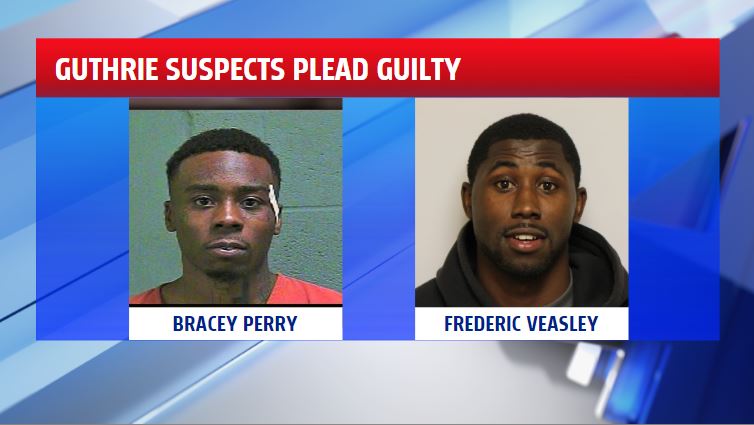 Frederic Veasley was able to plead guilty to an amended charge of accessory to first-degree murder. He was sentenced to 12 years in prison with credit for time served.

The other two suspects are set to go to trial later this year.