OKLAHOMA CITY – Residents across the Sooner State were awakened by a massive earthquake on Saturday morning.

Shortly after 7 a.m., a 5.6 magnitude earthquake was recorded by the U.S. Geological Survey near Pawnee.

That would tie Saturday’s earthquake with the earthquake that hit Prague in 2011, which damaged homes and buildings in Lincoln and Pottawatomie counties.

At least one aftershock registered as a 3.6 Magnitude.

However, Oklahomans weren’t the only ones to feel this quake.

Getting reports of the #earthquake being felt as far south as Austin, TX and as far north as Omaha, NE & Des Moines, IA. That's ~750 miles!

Hearing of a significant earthquake back in Norman. Hope everyone back home is safe.

Earthquake! At least 45 seconds long. Rumbled. Then shook like crazy.

Holy earthquake!!!! I thought there was a stranger coming down my stairs. #terrifying #okquake @USGS 7:04am

The Oklahoma City Fire Department said the earthquake caused them to receive four automatic alarm calls but they have not had to respond to any damage calls in the area.

Saturday afternoon, OCC is telling disposal well operators within 725 square mile area around the location of quake to shut down their wells.

That involves around 37 wells. 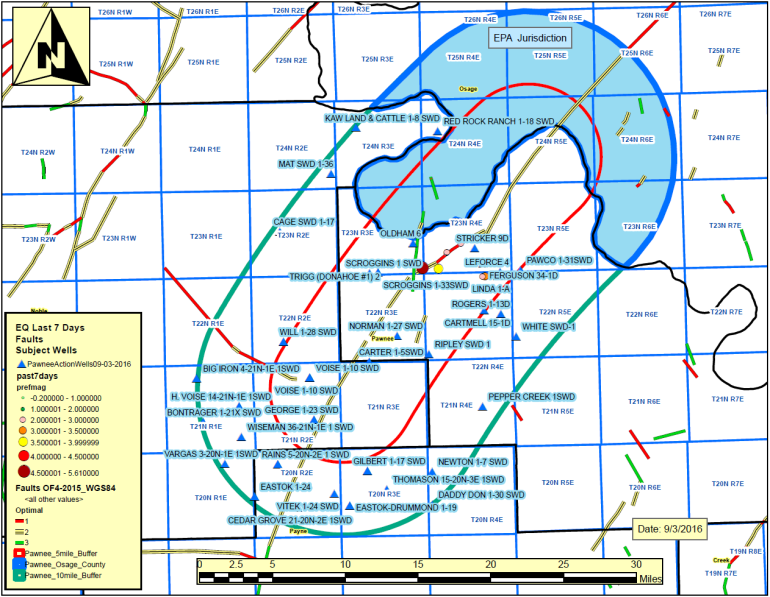 “I’m glad to hear no one was seriously hurt in today’s earthquake and damage appears to be limited. This emergency declaration will start the process to helping individuals, families and businesses impacted by the earthquakes and serves as a precursor to requesting any necessary assistance.

I appreciate the quick response by the Department of Emergency Management and Department of Transportation to assess damage of the affected area and to ensure our state highway and turnpike bridges are safe. And I applaud the Oklahoma Corporation Commission, the state agency tasked with regulating the oil and gas industry, in taking swift action by ordering all disposal wells within a 725-square mile area of today’s earthquake to shut down and working with the U.S. Environmental Protection Agency, which has sole jurisdiction over disposal wells in nearby Osage County.

Information on the earthquake is still being collected and will be reviewed by my coordinating council on seismic activity chaired by Secretary of Energy and Environment Michael Teague, as we continue to move forward to make our state safe.”

I have declared a state of emergency for Pawnee County due to the magnitude 5.6 earthquake that occurred today. . https://t.co/5EnsXuqI8I