NEW YORK – Up until she was 13, the only place Kai Sin called home was the refugee camp where she was born after her family escaped ethnic violence in Myanmar.

But, her life has changed dramatically since.

Last week, Sin, who is now 23, walked across the stage at the University of Utah and graduated with a degree in international studies and health policy.

She was one of 41 refugees to graduate from the university’s business school with the help of the Refugee Education Initiative. The privately funded program provides financial help, counseling and tutors to about 300 students from across the globe seeking everything from associate’s to graduate degrees. 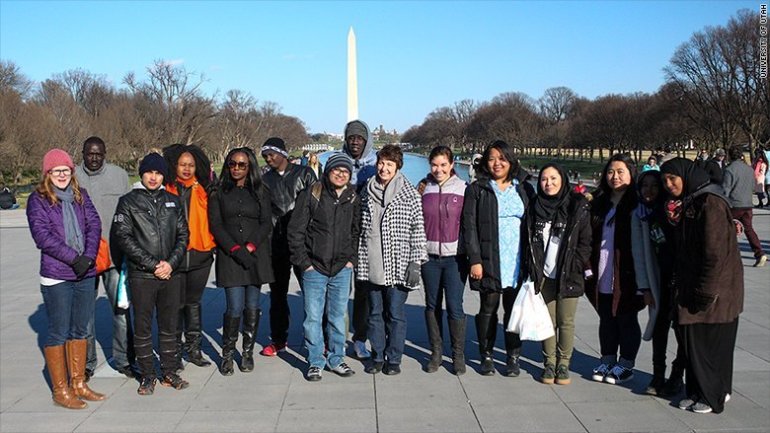 Sin came to Salt Lake City with her family when she was 13. To make ends meet, her mother worked in a factory and her dad in a furniture mill.

Sin excelled in school and secured scholarships and financial aid for college, but it still wasn’t enough for her to afford the $8,000 in in-state tuition at the University of Utah.

“When I first started [college], I was really struggling,” Sin said.

The Refugee Education Initiative helped her bridge a $1,000 per-semester gap and enabled her to complete her education.

Now an American citizen, Sin recently returned to the refugee camp where she was born on the border between Thailand and Myanmar (also known as Burma). There, she taught residents English and lessons on health care. In the fall, she plans to attend the University of Utah’s graduate school to study health education.

The nonprofit helps the refugees increase their income potential, and that can have an impact on future generations, said Michelle Conley, a civics professor at the University of Utah. It also empowers the students to give back.

“Most of the students volunteer in their communities,” Conley said.

Adhal Awan, is a refugee from South Sudan who plans to do just that.

“My dream has always been to go to school,” she said.

She arrived in Salt Lake City with her family when she was 18. Her mother fell sick soon afterward, and Awan had to find a job to help support the family.

Now 37 and a mother of five, she finally was able to earn her degree in social work with help from the Refugee Education Initiative. In the fall, she will pursue a master’s in social work with the hope of working with Utah’s growing Sudanese community.

Each year, Utah takes in roughly 1,000 refugees, according to the nonprofit Utah Refugee Service. It estimates that 60,000 refugees were living in the state in 2015.

“I think that the [Latter-Day Saint] community here in Utah has a deep sense of what it means to be a refugee, because we feel like we come from that background,” said Burton, who is Mormon.

Burton noted that Refugee Education Initiative is not religiously motivated, however, and respects the religions and beliefs of the program’s participants.

This nonprofit in Utah is giving financial assistance and other aid to about 300 refugees so they can go to college https://t.co/d1lhspnPdv pic.twitter.com/VeLnLWE7HO

Husna Adan is a 21-year-old refugee originally from Somalia who recently graduated with a bachelors in international studies and a minor in nutrition with the help of the Refugee Education Initiative. She was 6 years old when her family came to Salt Lake City.

“[At first,] we got some government assistance, like food stamps. But, after a few months, my oldest sister found a job at the airport, and she helped provide for us,” she said.

Adan completed an internship in the Utah Governor’s constituent services office and now plans to take a year off to volunteer before going to grad school.

“I’m just trying to give back to the communities that have impacted my life,” she said.

She sees a future in international work but plans to stay in Utah.