WASHINGTON – Vulnerable House Democrats privately met with Speaker Nancy Pelosi on Thursday to air out their views about the impeachment process with some still resistant to the notion about impeaching President Donald Trump. 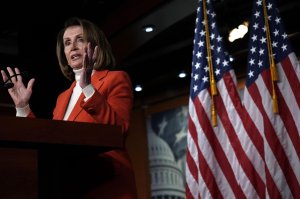 Several members made clear their views to keep the probe focused on the Ukraine matter — allegations that Trump asked the Ukrainian President to initiate an investigation into a potential 2020 political rival — and not the other allegations of wrongdoing detailed in the report from special counsel Robert Mueller.

Rep. Angie Craig, a vulnerable freshman Democrat from Minnesota, who said earlier this week that she supported the impeachment inquiry said Pelosi and Democratic leaders mostly listened to the views raised by the lawmakers.

“I’m in a district where I’ve been reluctant to move forward only from the perspective where I want to be disciplined, I want to look at due process and want to make sure we get all of our facts — and this process will allow us to do that,” Craig said, adding she backed a narrow probe led by the House Intelligence Committee.

Rep. Matt Cartwright, a Democrat from Pennsylvania, told CNN that he wouldn’t — at this point — vote for articles of impeachment.

“I would vote no right now because we haven’t seen all the facts,” Cartwright said. “We have to presume that people are innocent don’t we, and we have to see if what the press has been reporting, and what has been revealed in terms of documentation, if if all that is true.”

Rep. Anthony Brindisi, a freshman from New York, who has resisted calls for an impeachment probe, told CNN that he’s “not yet” there on impeaching Trump.

“I think that while I find many of the statements in the whistleblower’s report disturbing there’s a lot more information that’s out there,” Brindisi said. “I think we have to talk to some of these officials that they have listed in the report here and see where it goes.”

More than half the members of the US House of Representatives have said they support an impeachment inquiry, according to a CNN count. However, that count includes many Democrats who say they support an impeachment investigation but are still waiting for the results of the probe before deciding whether to finally vote to impeach Trump. Even if the House could pass the vote, it likely would go nowhere in the Republican-controlled Senate, one of many reasons the issue has been politically divisive in the party.

Still there has been a surge in support — more than 75 House members in about three days — of launching such an inquiry as part of the fallout from Trump’s July 25 call with Ukrainian President Volodymyr Zelensky where he discussed former Vice President Joe Biden. There is no evidence of wrongdoing by Biden.