OKLAHOMA CITY – A warrant is issued for the arrest of a man who authorities believe broke into a kayak shop and stole hundreds of dollars.

"It's kind of scary, a little creepy, watching the video and seeing him come in. He just did it so easy like it was nothing to him,” Mellissa Day, the manager of OKC Kayak, said. 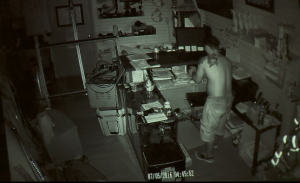 Shocking video from inside OKC Kayak shows an alleged thief breaking into the shop making a beeline to the cash register. He then slams it on the ground and takes off with $500.

"Doesn't look familiar. I didn't recognize. I don't know if he's been in here before but the way he went straight to the register it kind of seemed like maybe he had been here before,” Day said.

Day says one of the suspect’s visible tattoos says ‘Wiggins” which helped lead authorities to the name Trey Wiggins.

"He had actually been arrested earlier that night for being drunk and they took him to detox and he broke out of detox and I guess that's when he came here probably looking for some cash,” Day said.

According to the arrest affidavit, this happened back on July 5th and a warrant has now been issued for Wiggins’ arrest.

The folks at OKC Kayak say they’re ready for justice to be served.

"We would like that. It would be nice,” Day said.

Day says they also had a kayak stolen the same weekend. However, the suspect anonymously came forward using a pay phone. He then returned the kayak.

GRAND RAPIDS, Mich. (WOOD) — The parents of infant twins will have to adopt their own children after two judges denied them legal rights to the babies, who were born through a gestational surrogate.

WASHINGTON (WGN) — A 4-year-old boy in Washington, D.C. wanted to thank the National Guard for protecting the neighborhood — and he did it with cookies.

Kavi Sadar's mother, Janet, said it was his idea to bake the guard members cookies. They live close to the capital and Janet said after the riots on Jan. 6, it has been a little scary in their neighborhood.

(NEXSTAR) – Before leaving office former President Trump ensured that his extended family would receive protection from the U.S. Secret Service for the next six months, according to several reports.

The Washington Post, citing three people briefed on the plan, reports that Trump instructed the elite team of agents to protect not only himself, wife Melania and their son Barron, as provided by federal law, but also 14 extended family members.